Storm Izzy Dumps Foot of Snow and Causes Mayhem Across Eastern US: 200 Flights Are Canceled, Roads Close and Public Services Shut Down – as Arctic Blast Is Forecast to Make It Even Colder 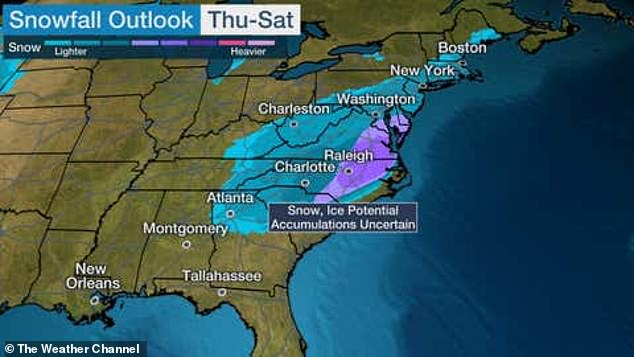 A second winter storm is set to hit the Southeast and Northeast later this week with freezing temperatures, ice and snow, after Storm Izzy dumped a foot of snow and caused mayhem across the Eastern U.S over the weekend.

Snow and ice stretched from Mississippi to Virginia as Izzy slammed the Southeast, leaving more than 250,000 without power over the weekend.

More than 200 U.S. flights were cancelled on Tuesday and about 600 were delayed due to the weather, according to the flight-tracking website FlightAware.

And now, as much of the country deals with the remnants of Izzy, another potential winter storm is forecasted later this week, the Weather Channel reported.

Arctic air is expected to hit ‘much of the Central and Eastern states’ during the second half of this week and could bring more snow and ice to parts of the Southeast and potentially the Northeast.