Biden Says He Is ‘Profoundly Disappointed’ After Republicans Are Joined by Democrats Manchin and Sinema in Rejecting Attempt to Change Filibuster Rules and Vote to Retain It 52-48, Effectively Killing His Voting Rights Bill 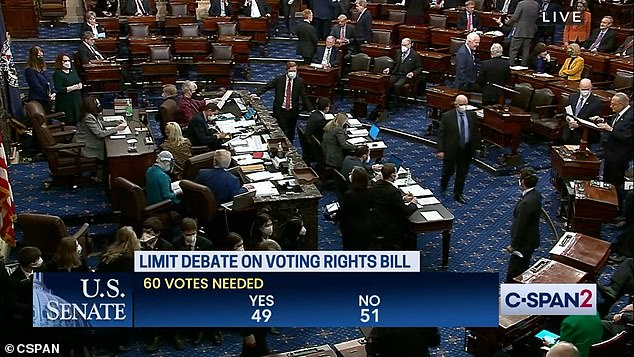 ‘I am profoundly disappointed that the Senate has failed to stand up for our democracy. I am disappointed — but I am not deterred. We will continue to advance necessary legislation and push for Senate procedural changes that will protect the fundamental right to vote,’ Biden tweeted.

Biden’s Democratic stalwarts Sen. Joe Manchin of West Virginia and Sen. Kyrsten Sinema of Arizona joined all 50 Republicans to thwart their own party in changing Senate rules to overcome a Republican filibuster after a raw, emotional debate.

With Vice President Kamala Harris standing by to break a 50-50 tie, but the rules change was rejected in a 52-48 vote, and Harris left before the final roll call.

Democrats needed 60 votes in order to end debate and initiate a vote on the legislation that would overhaul U.S. voting laws.

The package combined two separate legislative items that were already passed by the House — the Freedom to Vote Act and the John Lewis Voting Rights Advancement Act. The bills would make Election Day a holiday, adjust the redistricting process and crack down on money in politics.

Despite a day of piercing debate and speeches that often carried echoes of an earlier era when the Senate filibuster was deployed by opponents of civil rights legislation, Democrats could not persuade holdout senators Sinema and Manchin to change the Senate procedures on this one bill and allow a simple majority to advance it.