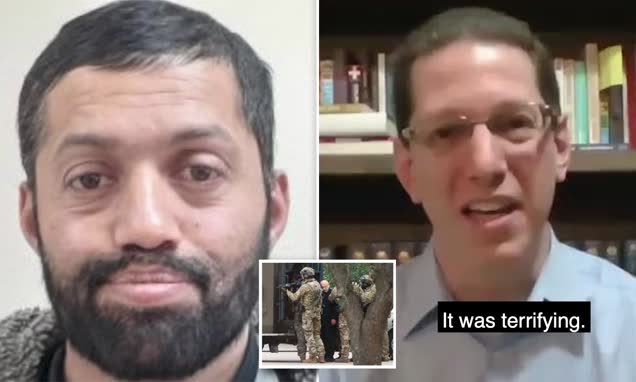 Rabbi Charlie Cytron-Walker welcomed Akram into Beth Israel Congregation in Colleyville, Texas, on Saturday unaware that he was carrying a gun. Akram tapped on the window then went inside and sat down for tea with Cytron-Walker before services commenced. It was when the rabbi was leading the congregation in prayer that the 44-year-old British gunman cocked his weapon and took the rabbi and three others as hostages. He was shot dead by SWAT teams after the hostages escaped. In an interview with CBS Mornings on Monday, Rabbi Cytron-Walker told how he’d welcomed him in without hesitation. ‘When I took him in, I stayed with him. Making tea was an opportunity for me to talk with him. In that moment, I didn’t hear anything suspicious. ‘Some of his story didn’t quite add up so I was a little bit curious but that’s not necessarily an uncommon thing. It was during prayer, while we were praying, my back was turned. We face towards Jerusalem when we pray. ‘I heard a click. It could have been anything… it turned out it was his gun,’ he said.