Bitcoin investors dig in for long haul in ‘staggering’ shift 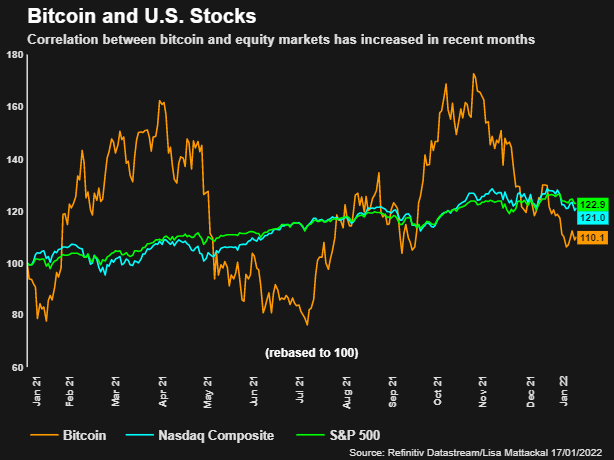 Jan 17 (Reuters) – As bitcoin heads into 2022, a growing cohort of long-term investors is doubling down on its stashes of the cryptocurrency, hoping a December dip was merely a festive blip.

Some industry watchers point to the underlying stability of such long-term investments as potentially promising indicators for the capricious cryptocurrency.

Since last July, for example, the amount of bitcoin held in digital wallets with no outflows for more than five months has been steadily increasing, according to digital currency brokerage Genesis Trading.

In addition, the amount of the bitcoin held in “illiquid” wallets – which spend less than quarter of their inflows – is also rising, meaning fewer coin are being actively traded, it added, citing wallet data across several exchanges.

“The number of bitcoins that haven’t moved in over a year has been climbing since July,” said Noelle Acheson, head of market insights at Genesis Trading. “That’s pretty staggering.”

Many investors were nonetheless sent diving for cover in December when the world’s most popular cryptocurrency sunk almost 20%, roughly the same as the second-biggest coin ether, with risk appetite hit by inflation fears and a quicker pace of interest rate hikes from the U.S. Federal Reserve.