WATCH: Shocked family of homeless man who thought he died in a stabbing three weeks ago discover he’s ALIVE after seeing him on news broadcast where he’s hailed as Good Samaritan for helping save police officer in fiery crash 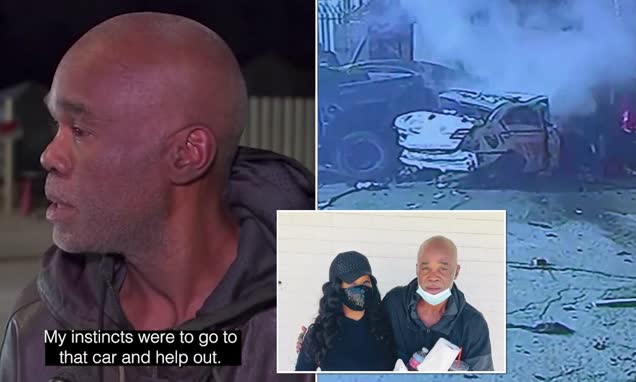 Johnny Walker’s family was told three weeks ago by authorities that he may have been killed in a stabbing, prompting his loved ones to search hospitals and morgues throughout the city in an effort to locate his body. But their hopes were renewed after spotting him, alive and well, in a news segment on Thursday where Walker was commended for being a Good Samaritan. Walker had pulled a Harris County sheriff’s deputy from a fiery crash on Thursday following a high-speed chase of a robbery suspect which killed a woman and injured two children, a five-year-old who is in critical condition and a two-year-old who is stable, police said. Five more vehicles were hit, according to authorities. Walker’s sister, Monica Collins told KHOU they ‘thought he [Walker] had passed away, and the fact that he helped save his officer’s life is…’