US Intelligence Warns That Putin Will Stage ‘false Flag’ Attack on His Own Troops as an Excuse to Invade Ukraine: Russia’s ‘sabotage Plan’ Revealed as Moscow Sends More Troops to the Border and Kiev Is Hit With Massive Cyber Attack 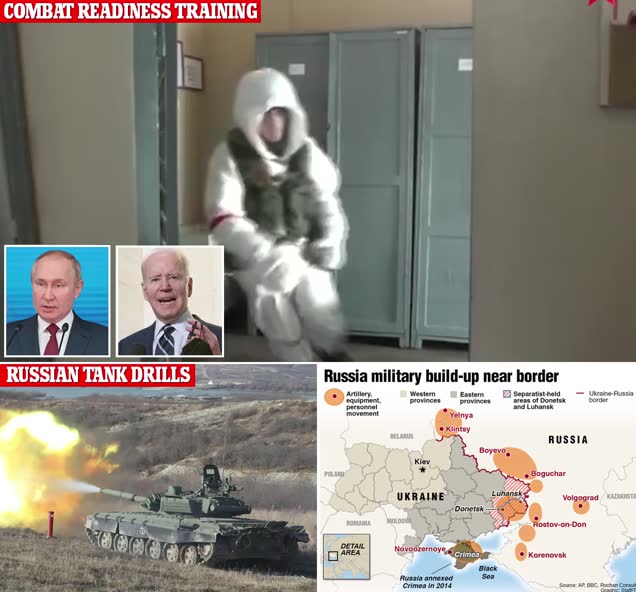 The US has intelligence that Russia is planning a ‘false-flag’ operation on its own forces in eastern Ukraine to create a pretext for invasion.

Officials on Friday also said they believed Russia was mounting a social media disinformation campaign to portray Ukraine as the aggressor.

The update, making the prospect of military conflict more immediate, came as Ukrainian government websites were taken offline in a ‘massive’ cyberattack, talks between Washington and Moscow collapsed and Russia held a combat readiness inspection of their troops.

Meanwhile, Russian foreign minister Sergey Lavrov said Russia had ‘run out of patience’ with the West as Moscow demanded assurances that NATO would not expand closer to its territory.

The United States has evidence that operatives trained in urban warfare and sabotage will carry out these attacks on Russian proxy forces, officials told journalists on Friday, possibly weeks before an invasion.

White House Press Secretary Jen Psaki warned of human rights violations and war crimes if diplomacy failed and the Russian government went ahead with its plans.

‘We have information that indicates Russia has already pre-positioned a group of operatives to conduct a false flag operation in eastern Ukraine,’ she said.

‘The operatives are trained in urban warfare and using explosives to carry out acts of sabotage against Russia’s own proxy forces.’

She said it mimicked the playbook used when Russia annexed the Crimean peninsula, and included social media disinformation to show Kyiv as the instigator of violence.

The Kremlin quickly denied it was preparing a provocation. Spokesman Dmitry Peskov said the reporting was based on ‘unfounded’ information, according to the TASS news agency.