Under shadow of Britney Spears’ sister Jamie Lynn’s claims that pop star ‘locked them in a room with a knife’, Britney Spears has an interview with Oprah Winfrey ‘in the works & she will tell all on family feud’ after slamming Jamie Lynn — Daniel Whyte III advises Christian sister Oprah not to do an interview with Britney Spears because she is not well at all. In other words, the elevator is not going all the way to the top. And Oprah, you will appear to be desperate and your good name can be sullied because the interview can backfire on you because people who are not well will turn on you and accuse you of breaking their family up when it’s all said and done. And after the disastrous interview with Harry & Meghan, you should avoid doing this interview 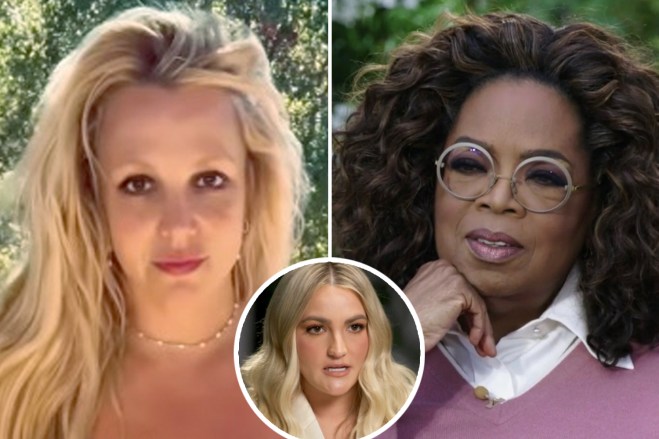 Britney Spears’ interview with Oprah Winfrey is “in the works” and she will “tell ALL” on her family feud and conservatorship, a source exclusively told The Sun.

The news comes after the pop star slammed her sister, Jamie Lynn Spears, for “profiting” off of her career and “spreading lies” during yesterday’s Good Morning America interview.

Though the Grammy winner was freed from her 13-year-conservatorship back in November, her relationship with her family remains shaky following years of alleged “abuse.”

“Britney is deeply hurt and angry others, who claim to love her, keep attempting to tell her narrative when it’s her story to tell,” an insider close to the entertainer told The Sun.

The source then claimed Britney, 40, will be sharing her story during a televised interview with Oprah Winfrey, 67, – something many fans have hoped would happen for years.

“She will absolutely be speaking out on her own terms. Nothing is locked in yet but things are in play right now.

“It’s happening this year, maybe sooner than fans think. She’s already talked to Oprah about doing a sit down and Britney wants an Oprah interview to happen.

“Oprah wants it to happen too. It seems like it’s going to work out, so she’s focusing on starting her new life now.”

The insider added that Britney is also “transitioning into a better house for her and very ready for her fresh start.”

Fans have begged for the Queen of Daytime to sit down with the Princess of Pop for years after previously interviewing her back in 2002.

However, the pressure was really put in place following the entertainment mogul’s bombshell interview with Meghan Markle last year.

During their highly-publicized chat, the former Duchess of Sussex and her husband, Prince Harry, explained the difficulties they were put through – including alleged racism – by the Royal Family at Buckingham Palace before they fled for a new life in America.

The Everytime singer hinted she wanted to do a similar tell-all back in November, when she posted on Instagram: “I might as well do a hint of my thoughts on the gram before I go and set things square on @Oprah !!!!! I mean who knows!”