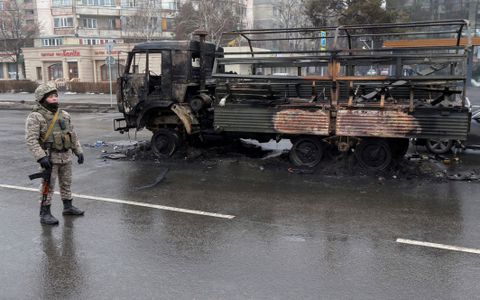 ALMATY, Jan 9 (Reuters) – Kazakhstan’s authorities said on Sunday the situation was stabilising after the worst political unrest in 30 years of independence, and that troops from a Russian-led military alliance were guarding key facilities.

Security officials told President Kassym-Jomart Tokayevin a briefing they were continuing “clean-up” operations across the oil and uranium-producing ex-Soviet republic that borders Russia and China.

Thousands have been detained and public buildings torched during mass anti-government protests over the past week. Tokayev issued shoot-to-kill orders to end unrest he has blamed on bandits and terrorists.

State TV channel Khabar 24 reported 164 people had been killed during the clashes, without going into details. The internet has been restricted and telecoms patchy making it difficult to check figures and confirm statements. No single group has emerged to speak for the protesters.

At Tokayev’s invitation, a Russia-led alliance of ex-Soviet states – the Collective Security Treaty Organisation (CSTO) – sent troops to restore order, an intervention that comes at a time of high tension in Russia-U.S. relations ahead of talks this week on the Ukraine crisis.

“A number of strategic facilities have been transferred under the protection of the united peacekeeping contingent of the CSTO member states,” the presidential office said.

Russian paratrooper commander Andrey Serdyukov said the force had finished deploying to Kazakhstan and would remain there until the situation stabilised completely.

Serdyukov said the troops were guarding important military, state and socially-important sites in major city Almaty and nearby areas. He did not identify the facilities.

The deployments signal resolute Kremlin backing for the Kazakh authorities in a region Moscow sees as vital to its security along its southern flank.

“The counter-terrorist operation … will be continued until the complete elimination of the terrorists,” Deputy Defence Minister Sultan Gamaletdinov said.

“The situation has been stabilised in all regions of the country,” the presidential office said, adding law enforcement agencies had seized back control of administrative buildings.

What began a week ago with demonstrations against a fuel price rise exploded into a wider protest against Tokayev’s government and the man he replaced as president, Nursultan Nazarbayev.

The violence has dealt a blow to Kazakhstan’s image as a tightly controlled and stable country, which it has used to attract hundreds of billions of dollars of Western investment in its oil and minerals industries.

It has spurred speculation of a deep rift in the ruling elite, with Tokayev fighting to consolidate his authority after sacking key officials and removing Nazarbayev from a powerful role as head of the Security Council.