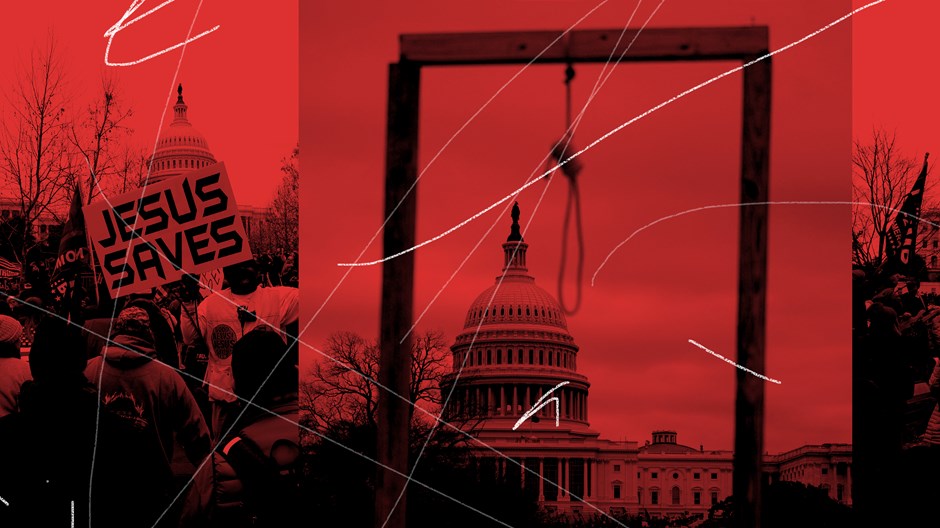 A year has passed since the January 6 insurrectionist attack on the United States Capitol, and two images still haunt my mind. One is that of a makeshift gallows constructed to threaten the murder of the vice president of the United States. And the other is that of a sign, held above that angry crowd, that read, “Jesus Saves.” That these two images can coexist in the same mob is a sign of crisis for American evangelicalism.

Some might dismiss the Christian symbols at the insurrection—not only signs but prayers “in Jesus’ name” right next to a horn-wearing shaman in the well of the evacuated US Senate. And some might wave away the evangelicals who falsely claimed in the days afterward that it had been a crowd of antifa activists, not people from the rally at which the then–President of the United States incited the mob to march to the Capitol.

And yet, survey after survey shows that alarming numbers of white evangelicals believe the lie behind the attack—that the 2020 election had been stolen by a vast left-wing conspiracy that somehow included the conservative Republican governors and election officials in Georgia and Arizona.

An evangelical megachurch hosted former President Trump in recent days—with the crowd chanting “USA!” in response to the former president’s political speech. That scene might be a little too on the nose for most evangelicals, but the polling data show that it is not an aberration. And the same surveys show that, far from “cooling off” after the Trump era and the insurrection, these people believe that violence might be justified in the days to come.