Grace Curley Tells Openly Homosexual Transportation Director Pete Buttigieg Racism Didn’t Cause the Nightmare on I-95 and Trillions in Cash Won’t Fix It, You and Your Fellow Progressives Need to Stop Trying to Save the Planet and Start Fixing the Potholes 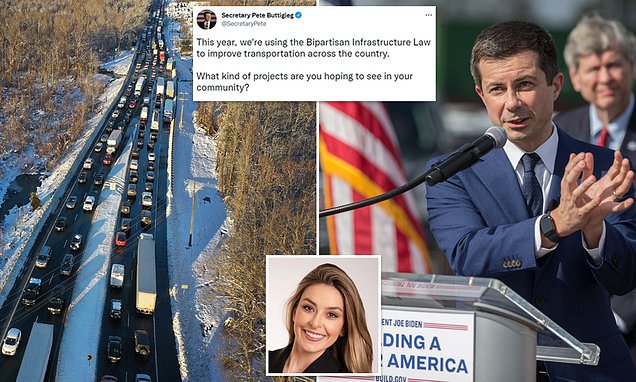 The Biden administration apparently knows what went wrong on Virginia’s I-95 on Tuesday, after an entirely predictable winter storm trapped hundreds of drivers in frigid temperatures for 24+ hours.

They didn’t pour enough money on it!

Even as commuters sat shivering in their vehicles, Kamala Harris took to Twitter.

The gaffe-prone Vice President never wastes an opportunity to make a bad situation even worse for the Biden-Harris administration.

The tweet, even by Kamala standards, was incredibly tone-deaf.

‘Because of the Bipartisan Infrastructure Law, America is moving again. That’s what infrastructure is all about: getting people moving.’

The explanation for this poorly timed tweet is anyone’s guess.

I’m betting a naive social media intern sent it out without realizing the optics nightmare that would ensue.

If that is the case, and if the rumors about the Vice President’s treatment of her staff are true, then good luck to the poor soul who hit send on that whopper.

It is conceivable that Kamala and her team didn’t know about the turmoil on I-95.

After all, Harris has been tasked with solving the border crisis, advancing voting rights, and filming YouTube videos about the moon’s craters with paid child actors.

Her schedule is jam-packed.

But what makes no sense whatsoever is the fact that Transportation Secretary Pete Buttigieg decided to retweet the Vice President’s empty message.

What is Pete’s excuse for being out of the loop?