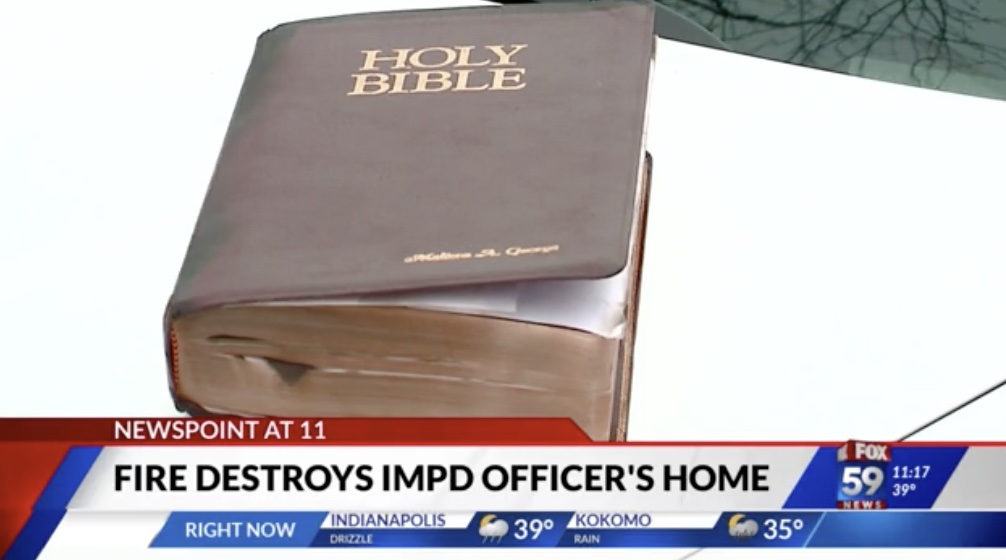 An Indiana police officer whose house burned to the ground just two days before Christmas discovered that his family Bible had been completely untouched by the flames.

Price, who said the Bible has been in his family for decades, showed the preserved book to reporters. And, when one juxtaposes the dilapidated home with the immaculate state of the Bible, it’s pretty shocking.

The untarnished Bible, which is making headlines, meant a lot to Price.

“It opened my eyes real well,” he told WISH-TV. “I mean, we’ve always been big believers and everything, but that, to me, means a whole lot.”

Price told WXIN-TV he lost everything in the inferno. He was at an Indiana Pacers game when the fire broke out. By the time he and his family reached home, it was already too late.

“It was about halftime at the game, and we got the call,” he told WTHR-TV. “A relative drove by because he lives close, and him and the neighbors called saying, ‘Your house is fully engulfed.’”

Price’s dog, Gus, died in the blaze, and most of the family’s items were destroyed. Despite losing almost everything and feeling helpless, the officer said he is grateful.

“We did lose a lot of material stuff; it’s everything you have,” he said. “You have to start over, but the best thing is nobody was home, and we still have what’s important to us.”

Price said the community has rallied to help him and his family as they prepare to rebuild their lives. A GoFundMe aimed at raising $10,000 has already brought in well over $20,000.

The cause of the fire is currently unknown and under investigation.