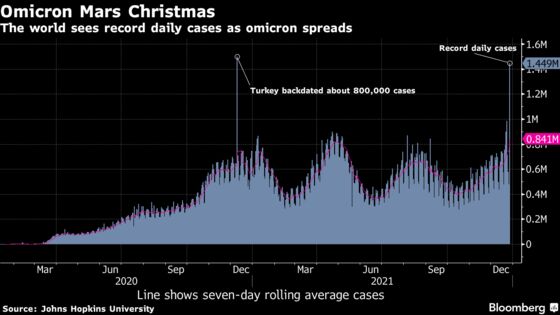 (Bloomberg) — Global Covid-19 cases hit a daily record on Monday, disrupting the holiday season a year after vaccines first started rolling out and two years after the emergence of the virus that many hoped would be fleeting.

The more than 1.44 million worldwide infections smashed the prior record after factoring out a day in December 2020 when Turkey backdated a significant number of cases. A more conservative gauge — the seven-day rolling average that smooths out one-time fluctuations and holiday reporting irregularities — is also at an all-time high, owing to a tidal wave of omicron infections.

The highly mutated and most transmissible variant yet, omicron is fast becoming the dominant strain globally as it evades immunity normally provided by vaccines and previous infections. The seven-day rolling average of cases on Monday stood at about 841,000, a jump of 49% from a month ago, when omicron was first identified in southern Africa.

Studies suggest that although omicron infects 70 times faster than previous strains, the illness it causes may not be as severe, especially for people who have been vaccinated and received a booster shot. The ease of transmission and soaring number of cases could still squeeze hospital capacity worldwide, leaving the unvaccinated and anyone who needs medical care for other conditions in the lurch.