Evangelicals Are a Rising Force Inside Argentina’s Prisons 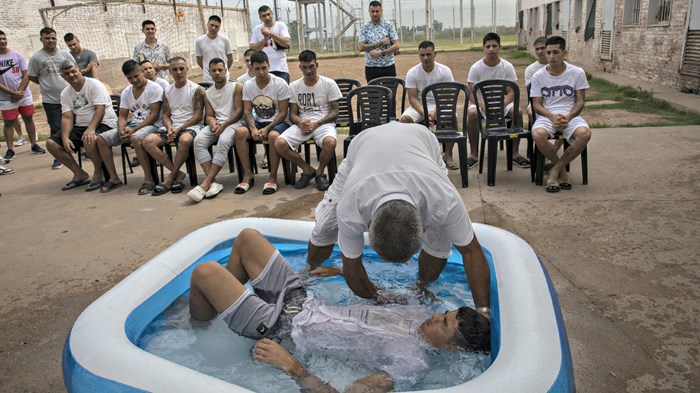 The loud noise from the opening of an iron door marks Jorge Anguilante’s exit from the Pinero prison every Saturday. He heads home for 24 hours to minister at a small evangelical church he started in a garage in Argentina’s most violent city.

Before he walks through the door, guards remove handcuffs from “Tachuela”—Spanish for “Tack,” as he was known in the criminal world. In silence, they stare at the hit-man-turned-pastor who greets them with a single word: “Blessings.”

The burly, 6-foot-1 man whose tattoos are remnants of another time in his life—back when he says he used to kill—must return by 8 a.m. to a prison cellblock known by inmates as “the church.”

His story, of a convicted murderer embracing an evangelical faith behind bars, is common in the lockups of Argentina’s Santa Fe province and its capital city of Rosario. Many here began peddling drugs as teenagers and got stuck in a spiral of violence that led some to their graves and others to overcrowded prisons divided between two forces: drug lords and preachers.

Over the past 20 years, Argentine prison authorities have encouraged, to one extent or another, the creation of units effectively run by evangelical inmates—sometimes granting them a few extra special privileges, such as more time in fresh air.