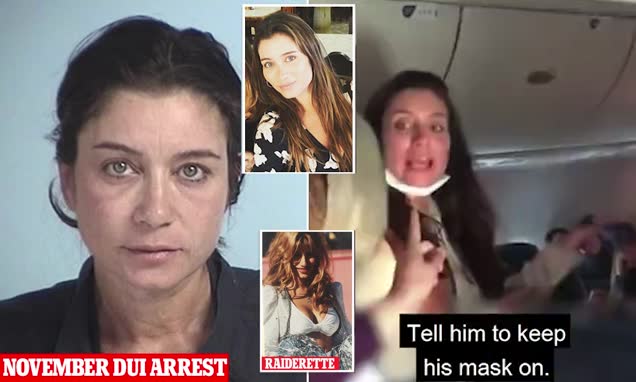 A woman who was arrested last week for getting into a fight with an elderly man who was not wearing a mask on board a flight had earlier compared herself to Civil Rights icon Rosa Parks, according to a criminal complaint filed on December 24.

The complaint, obtained by DailyMail.com, claims Patricia Cornwall was trying to get back to her seat from the bathroom on a Delta Airlines flight from Tampa to Atlanta on Thursday when a flight attendant with a beverage cart was blocking the aisle.

Cornwall, 51, a former Playboy model and Los Angeles Raiders cheerleader who once appeared in an episode of Baywatch, allegedly asked the flight attendant for help getting back to her seat, but the flight attendant told her to just take an open seat until they were done handing out drinks.

At that point, Cornwall allegedly asked, ‘What am I, Rosa Parks?’ according to the complaint – comparing her situation to a Civil Rights icon who refused to give up her seat at the front of a bus in Alabama in 1955 even though black people were relegated to the back of the bus at the time.

Her comment reportedly got the attention of an 80-year-old man sitting nearby who told her that she ‘isn’t black … This isn’t Alabama and this isn’t a bus,’ the complaint states.

He also reportedly told her to ‘Sit down, Karen,’ to which Cornwall replied: ‘Sit down p****.’

Soon, the two started a fight that went viral on social media, with Cornwall seen punching, scratching and spitting at the older male passenger.

She was later arrested at the Hartsfield-Jackson Atlanta International Airport by Atlanta police, and she was taken into custody by the FBI. She has since been released on a $20,000 bond.

Cornwall had previously been arrested back in November for a DUI, after she crashed her car into a tree in Santa Rosa Beach, Florida, and started attacking the responding officers, TMZ first reported.