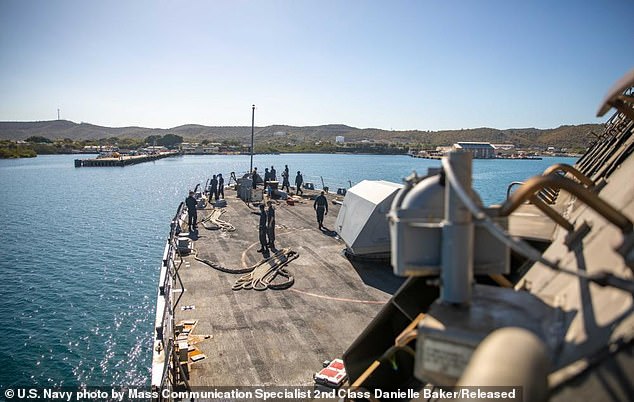 A US Navy warship with a fully vaccinated crew has paused its deployment in Cuba on Friday following a COVID outbreak.

The USS Milwaukee, a littoral combat ship, has been forced to stay in port at Naval Station Guantanamo Bay where it had stopped for a visit.

The ship had only been on the water for less than two weeks following its deployment from Mayport, Florida, on December 14 where it was heading into the U.S. Southern Command region.

The Navy said in a statement that the ship’s crew is ‘100 percent immunized’ and that all of those who tested positive for COVID-19 have been isolated on the ship away from other crew members.

They also said that ‘a portion’ of those infected are having mild symptoms, and that the specific variant is not yet known.

‘The ship is following an aggressive mitigation strategy in accordance with Navy and CDC guidelines,’ the Navy said.

The number of the 105-member crew testing positive was not disclosed.

In addition to the ship’s crew, a member of the Coast Guard law enforcement personnel was also on board as well as an aviation unit used for operating helicopters and drones.

This outbreak comes amid the surge of COVID-19 cases as the presence of the new Omicron variant which has become the dominant strain after accounting for 73 percent of the country’s cases.