Take Heed Parents: Parents of Michigan School Shooter Ethan Crumbley Were Shown Math Homework He Had Drawn a Gun on and Scrawled ‘Blood Everywhere’ Just Hours Before His Rampage – but They Took No Action: Mother Texted Her Boyfriend About Murder Weapon 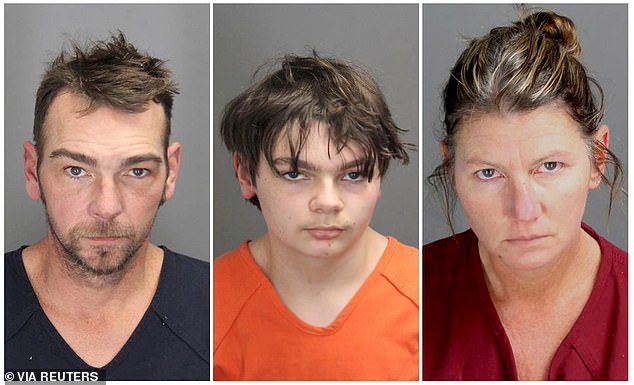 Ethan Crumbley, the 15-year-old accused of going on a rampage and killing four of his fellow students at Oxford High School in Michigan, was ‘intent on violence,’ prosecutors revealed Thursday.

The most troubling piece of evidence revealed was a drawing of a gun on a math homework sheet with the messages: ‘My life is useless,’ ‘Blood everywhere’ and ‘The thoughts won’t stop, help me.’

It’s part of Oakland County prosecutors’ attempt to paint his parents, James and Jennifer, both 43, as neglectful and aware of Ethan’s potential for violence. The prosecutors’ filings include allegations that Ethan’s mother was carrying on an affair while ignoring her son’s spiral and had texted her boyfriend about the murder weapon.

Their son had allegedly drawn the messages earlier that morning and a teacher had found them, took a screenshot and got in touch with a counselor.

It’s part of a pattern of signs that prosecutors accuse the Crumbleys of ignoring over the past six months suggesting that their teenager needed help.