Queen Elizabeth’s moving tribute to Prince Philip: Her Majesty will pay heartfelt tribute to her late husband in Christmas Day speech as she faces festive season without him after 73 years of marriage 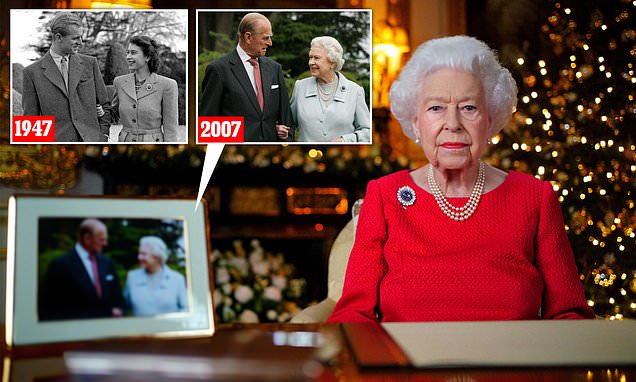 The Queen will pay a moving tribute to her ‘beloved’ Prince Philip in tomorrow’s Christmas Day message. Facing her first festive season without her husband of 73 years, she has recorded a ‘particularly personal’ address to the nation. Buckingham Palace issued a moving photograph of the Queen sitting at her desk as she prepared for her Christmas address, which she recorded last week. The picture was taken in the White Drawing Room at Windsor Castle, accompanied by a single, framed picture of her and Philip captured in 2007 at Broadlands country house in Hampshire to mark their diamond wedding anniversary (right inset). The couple had spent their honeymoon there in 1947 (left inset).