Pope Shakes Up Office That Handles Migration and the Coronavirus Plague 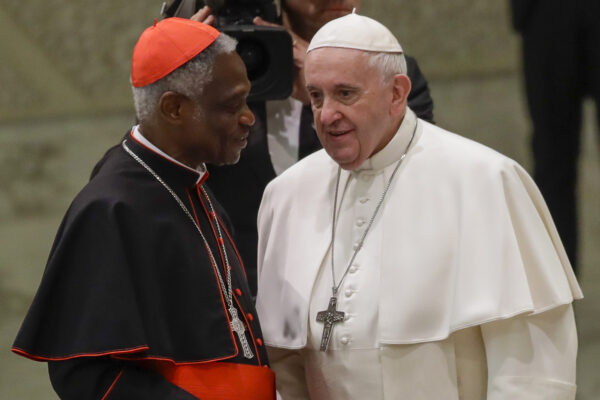 ROME (AP) — Pope Francis on Thursday removed the head of the Vatican office that handles migration, the environment and COVID-19 issues, and put a trusted cardinal and one of the Holy See’s most influential nuns at the helm temporarily.

Francis thanked Cardinal Peter Turkson for his five years of service but decided on new leadership following the results of an internal investigation, the Vatican said.

Turkson, who until Thursday was the highest-ranking African person at the Holy See, told reporters earlier this week that he had submitted his resignation to Francis and that it was up to the pope to decide what to do with it.

Francis created the Dicastery for Integral Human Development in 2016 by merging four existing Vatican offices that handled migration issues, the Vatican’s charity work and its justice and peace initiatives. Turkson, a 73-year-old Ghanaian, was put in charge.

The office handles the dossiers closest to Francis’ heart. It was responsible for some of the early drafts of his 2015 encyclical on the environment, was instrumental in the runup to his synod on the Amazon rainforest, and most recently has housed the pope’s COVID-19 Commission, which aims to serve local churches in responding to the pandemic.

But in a sign Francis had other plans down the line, he decided in 2019 to make a cardinal out of one of Turkson’s deputies, Michael Czerny. It was a clear break from Vatican protocol that sees only one cardinal per Vatican office. Czerny, a Czech-born Canadian and a Jesuit like the pope, had been in charge of the office’s migration section and now takes over the whole operation as prefect, ad interim.

Working as his deputy will be Sister Alessandra Smerilli, an Italian economist who has spearheaded the Vatican’s COVID-19 response and is now one of the highest-profile women in the Vatican bureaucracy.

Earlier this year, Francis asked Chicago Cardinal Blase Cupich, a close ally, to conduct an internal investigation, known as a visitation, into the operations of the Human Development office. The results have not been released, and Francis has launched similar investigations of other Vatican offices that preceded shakeups.

Soon after Cupich’s report was delivered, Turkson’s two secretaries abruptly left office, one after he reached retirement age and the other to return to his home diocese in Argentina. No explanation was given.

The latest leadership change was announced on the day Francis delivered his usual tough-love Christmas greeting to members of the Vatican bureaucracy, demanding they show more humility and less pride in the coming year.

Francis made no mention in his speech about his plans for reforming the bureaucracy itself, of which the Dicastry for Integral Human Development is a key part.

Francis had been expected to release a reform blueprint this fall, but the document was not published. Presumably he decided not to name a permanent new head of Turkson’s office pending the official release of the document.