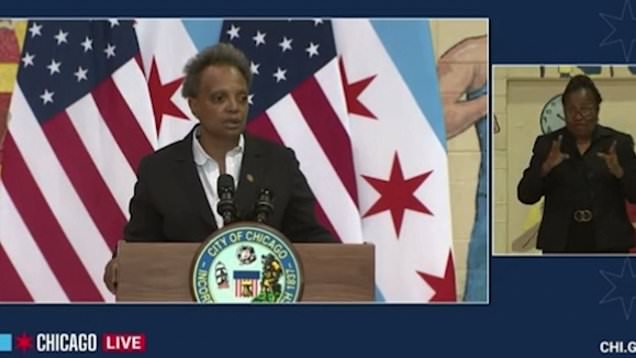 Chicago Mayor Lori Lightfoot pleaded with Attorney General Merrick Garland on Monday to send Alcohol, Tobacco and Firearms agents to the city for six months after the city reaches a 25-year high in the number of murders.

The woke mayor announced at a news conference in Garfield Park on Monday that she made a formal request to Garland to send ATF agents to Chicago for six months, a well as more federal prosecutors and federal marshals to help get illegal guns off the streets.

This comes after the democrat proposed slashing $80 million from the Chicago Police Department budget in 2020 during ‘defund the police’ protests.

The proposal was later scaled back and 3.3% of the budget – or $59 million – was cut and Lightfoot has since denounced the ‘defund’ movement, but Chicago’s police union still issued a vote of ‘no confidence’ in the mayor earlier this year.

‘The federal government remains uniquely qualified to help address the scourge of gun violence,’ Lightfoot said on Monday. ‘We need these additional resources well in advance of next summer.’

Chicago is currently fighting a 25-year high murder rate, with 767 homicides occurring within the city so far this year.

It is also seeing a 7.5 percent increase in violent crime this year when compared to pre-pandemic levels in 2019, according to an analysis from Axios, with some parts of the city seeing double the number of fatal shootings.

In a statement to DailyMail.com, a representative from Garland’s office said: ‘We’re aware of the Mayor’s request and concerns raised.’

He noted that Garland has previously sent ATF agents into the city in July.