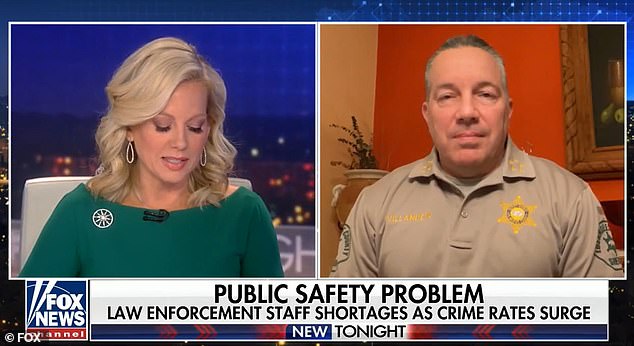 The Los Angeles County Sheriff has slammed San Francisco DA Chesa Boudin for ‘flying in the face of common sense’ and undoing the work of police with ‘woke laws,’ as the state grapples with staggering crime rates.

Alex Villanueva, who was elected LA County Sheriff in 2018, took aim at Boudin after the liberal prosecutor called recent efforts to crack down on rampant smash-and-grab crimes a ‘knee-jerk reaction.’

‘But when you fly in the face of common sense…I have a 92 percent increase in homicides in two years. I have a 16 percent increase in grand-theft auto. I have a ‘zero bail’ schedule, which means every person I catch with a stolen car gets a ticket, walks out of jail…in fact, they’re out of jail before [deputies are] even done writing the report,’ Villanueva added.

The sheriff added that Boudin and other George Soros-backed woke prosecutors like LA County DA George Gascon turned against police as part of their political agenda, but don’t realize how harmful it is for the community.

‘And it’s people … They live in this ‘woke palace’ where they’re not affected by the policies, but the average person IS impacted by them.’

Property and violent crime in Los Angeles, San Diego, San Francisco and Oakland have jumped seven percent between 2020 and 2021, reaching a total of 25,000 in October, the New York Post reported.