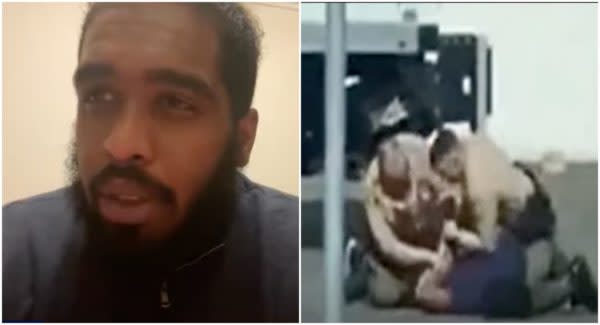 The Los Angeles County Sheriff’s Department, multiple deputies, and Sheriff Alex Villanueva are facing a federal civil rights lawsuit after a video surfaced showing deputies holding a Black man down and hitting him in the head during a traffic stop for expired tags.

Andre Olivas, from Buffalo, N.Y., was pulled over in Long Beach in February because the truck he had rented for work had expired tags. Olivas says he told deputies he didn’t know the tags were expired and asked to speak to a supervisor. That’s when it turned violent. In the video, one deputy is seen holding Olivas on the ground while another hits him in the head multiple times.

“I kind of feel like that’s what really escalated it, was me asking to speak to a supervisor,” Olivas said. “Everything I wanted to do was comply and give them the information that they need. To be honest [I was] scared for my life. I didn’t know what was going on because it was without any warning.”