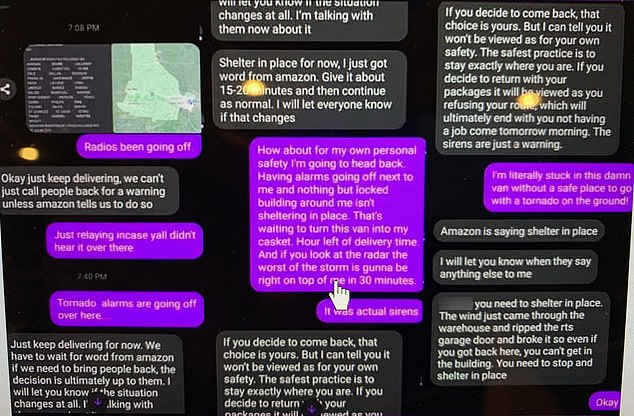 An Amazon delivery driver was told she would be fired if she did not finish her deliveries during the deadly tornado that hammered Illinois and killed six workers at its distribution center.

The unnamed Amazon delivery driver informed her boss at the dispatch that tornado sirens were sounding in her area and suggested she head back to the base for safety, but the supervisor threatened her with termination, according to the text messages provided to Bloomberg.

About 80 minutes later, a tornado struck one of the company’s warehouses on December 10 in Edwardsville – approximately 30 miles from where she was located.

Despite the oncoming tornado and the driver’s fear for her safety, the boss warned that if she decided to return without finishing her deliveries ‘you not having a job come tomorrow morning.’

‘If you decided to come back, that choice is yours. But I can tell you it won’t be viewed as for your own safety,’ the boss said.

‘The safest practice is to stay exactly where you are. If you decide to return with your packages, it will be viewed as you refusing your route, which will ultimately end with you not having a job come tomorrow morning. The sirens are just a warning.’

The dispatcher only realized the danger and relented after the tornado struck the Amazon facility.