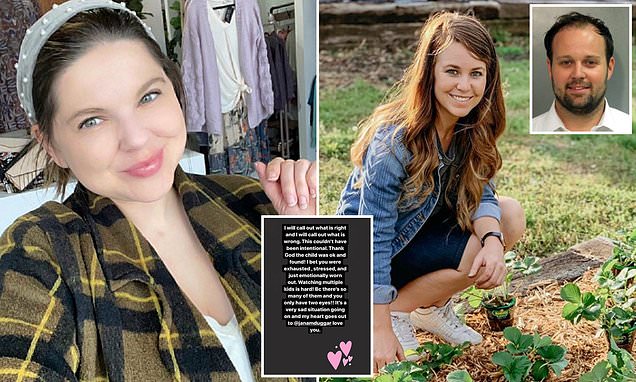 Amy Duggar King (left) offered support to her cousin Jana Duggar (right) as she battles a child endangerment charge in Arkansas. Amy said that Jana’s actions weren’t intentional and that she had been watching multiple children when the incident occurred. ‘I bet you were exhausted, stressed and just emotionally worn out,’ Amy said on Instagram Saturday (inset). ‘Watching multiple kids is hard!’. Jana, 31, who was cited in the incident in September, has pleaded not guilty to the misdemeanor charge of endangering the welfare of a child. She is expected in court next month. It is unclear what exactly the allegations against her are. The news of Jana’s misdemeanor came Friday, just one day after her brother Josh Duggar (top right inset) was found guilty of child porn charges.