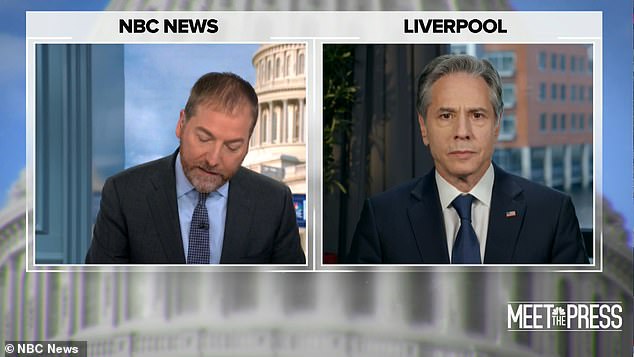 Secretary of State Antony Blinken on Sunday reiterated a warning from the United States and its allies that Russia could face ‘massive consequences’ if it continued its ‘reckless and aggressive’ actions against Ukraine.

‘We are looking at and we are prepared to take the kinds of steps we’ve refrained from taking in the past that would have massive consequences for Russia,’ Blinken told Meet the Press host Chuck Todd.

He also said an in-person meeting between Presidents Joe Biden and Vladimir Putin ‘seems pretty unlikely’ while Russia continues on a concerning path.

The country’s top diplomat was in the United Kingdom this weekend where he met with his counterparts in the Group of Seven economic powers. Russia has captured the world’s attention in recent weeks by amassing troops and military equipment at its border with Ukraine at lightening speed.

‘I found all of our allies very resolute, both in their deep concern about what Russia may be doing and may be planning, as well as their determination to take strong, coordinated steps if Russia does act aggressively,’ Blinken said.

While Biden has said unilaterally confronting Russia with military force is ‘off the table,’ severe economic sanctions, the closure of a new gas pipeline and adding military support to Eastern European NATO allies have all been floated.

Officials both in and outside of Kyiv are concerned the buildup is a precursor to an invasion, though Moscow has denied any plans to attack the former Soviet satellite state.