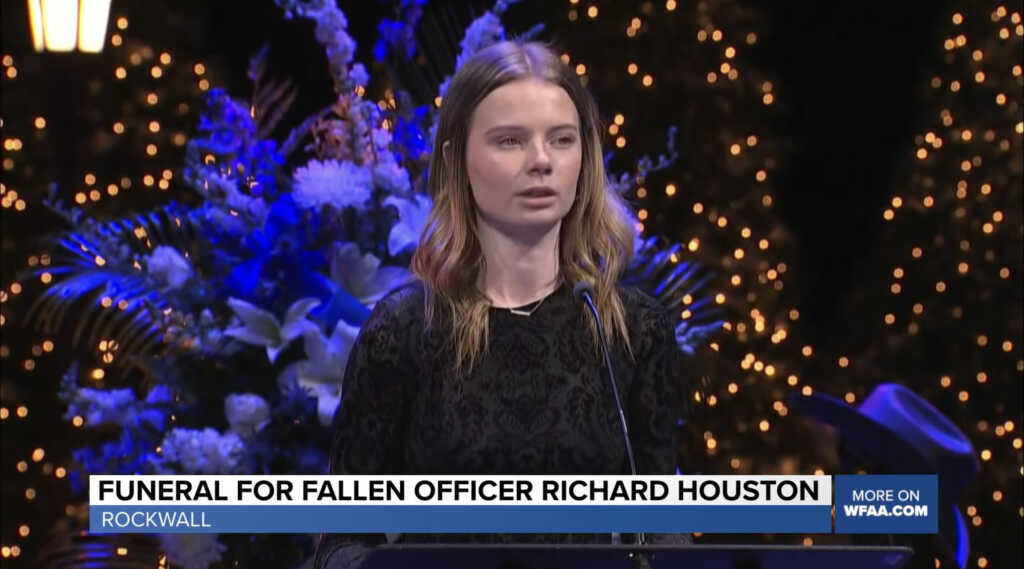 Eighteen-year-old Shelby Houston just lost her father — a 21-year veteran of the Mesquite Police Department — but rather than hate his killer, the teenager is showering God’s love on him.

Officer Richard Houston was fatally shot Friday while responding to a disturbance call outside a local supermarket, according to KERA-TV. On Thursday, the slain hero’s family, friends, and community came together for a funeral service to honor his legacy.

Leaning on the tenets of her Christian faith, Shelby offered a truly countercultural eulogy.

The 18-year-old said she has always had “a tough time” dealing with assailants who “don’t know Jesus” — a profound feeling overwhelming her even in the wake of her father’s death.

Here is a transcript of part of Shelby’s speech:

I remember having conversations with my dad about him losing friends and officers in the line of duty. I have heard all the stories you can think of, but I’ve always had such a hard time with how the suspect is dealt with. Not that I didn’t think there should be justice served, but my heart always ached for those who don’t know Jesus, their actions being a reflection of that.

I was always told that I would feel differently if it happened to me. But as it’s happened to my own father, I think I still feel the same. There has been anger, sadness, grief, and confusion — and part of me wishes I could despise the man who did this to my father — but I can’t get any part of my heart to hate him. All that I can find is myself hoping and praying for this man to truly know Jesus. I thought this might change if the man continued to live, but when I heard the news that he was in stable condition, part of me was relieved.

My prayer is that, someday down the road, I’d get to spend some time with the man who shot my father — not to scream at him, not to yell at him, not to scold him, simply to tell him about Jesus.

Later in her eulogy, Shelby said she has been thinking about what it must be like to be united with Jesus in heaven, reflecting, ”I can imagine it’s a much better place than here.”

”I’m resting in the obedience of my dad to the Lord,” she said. “In Isaiah 6:8, it says, ‘Then I heard the voice of the Lord saying, ‘Whom shall I send and who will go for us?’ And I said, ‘Here I am. Send me.’’ And I don’t think my father ever knew that his ‘Yes’ to the Lord would ever end up being like this, but, as I look out to you all today, this is just a picture of the faithfulness of Jesus.”

“I know my dad is looking down today with the biggest smile on his face, in the arms of Jesus,” the teenager continued, fighting back tears. “I know as he entered the gates of heaven, he was greeted with: ‘Well done, good and faithful servant.’ What a moment that was.”

Enduring profound grief, Shelby declared, “Eighteen years with you, daddy, was just not enough time. You were faithful, steadfast, kind, loving, selfless, hardworking. On Dec. 3, you were silenced. But you will forever live on in my heart today and all the days to come.”

“In my deepest wound, I saw the glory of Jesus, and it has astounded me,” she added. “You’re my hero, daddy, and I’m so proud to call you my father. I love you most, and I’ll see you someday soon.”

Right before her father was murdered, Shelby was preparing to preach at her church for the very first time on a Wednesday night, an exciting but nerve-racking opportunity.

The last text the teenager received from her father was a reassuring message. Houston told his nervous daughter he will support her “always and forever,” encouraging her to share what she knows and to enjoy the opportunity, according to KHOU-TV.

“Sometimes it feels very overwhelming,” he wrote. “But I’m here to tell you everything will be OK. You got this. Remember that, no matter what, me and your mom got your back. Always and forever.”

For Shelby, that text message will forever mean the world.

“I don’t think he knew that this text would actually mean more than just another Wednesday night,” she said Thursday, just days after her dad died.