Josh Duggar’s cousin Amy says ‘Thank you Jesus. Justice has been served’ as she celebrates his guilty verdict – and says she hopes the sisters he abused ‘feel validated’ 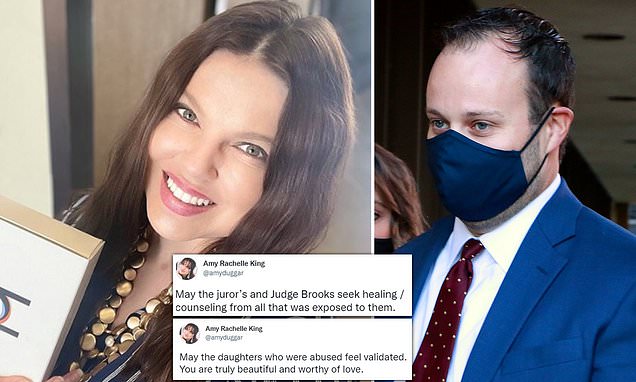 Amy Duggar King has shared her prayers for the judge, jury, and victims in her cousin Josh Duggar’s trial after he was found guilty of receiving and posessing child pornography this morning.

Amy, 35, has been by far the most vocal member of the family in condemning Josh since his arrest in April, and tweeted multiple times during his trial that she was praying for justice.

Now that Josh awaits sentencing — where he faces up to 40 years in prison and a half-a-million-dollar fine — Amy has tweeted her prayers for everyone involved, from the jurors that were exposed to child sexual abuse material at trial to the sisters who were abused.

She also prayed that those who were in ‘disbelief’ that Josh could do something so heinous now have their ‘eyes opened.’

Finally, she praised Jesus for the guilty verdict, writing: ‘Thank you Jesus. Justice has been served.’