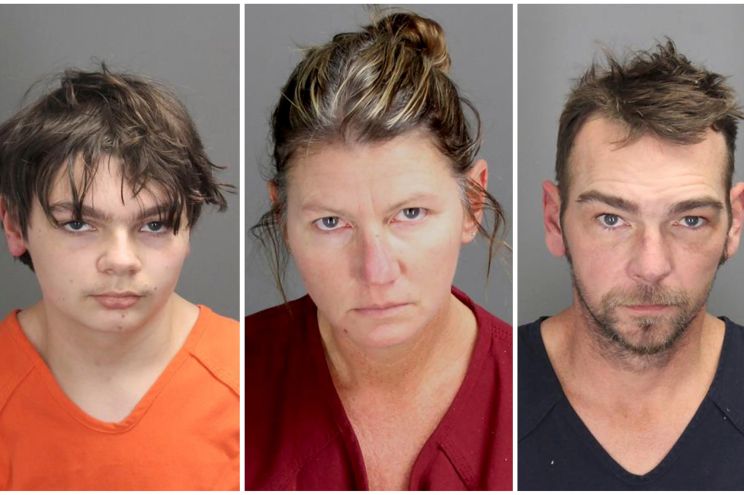 Accused Michigan school shooter Ethan Crumbley and his parents have shown ‘no remorse’ after the 15-year-old allegedly killed four students and wounded seven others at his Detroit-area high school.

James, 45, and Jennifer, 43, Crumbley, whom Oakland County Sheriff Michael Bouchard has described as ‘obviously sullen,’ are currently on suicide watch as they are held in lieu of $500,000 cash bail. The sheriff says they haven’t spoken much.

‘They’re not talking much to us,’ Bouchard said during an MSNBC interview Saturday. ‘[They’re] obviously sullen, but not a lot of conversation.’

He continued: ‘We’ve not seen any remorse. I don’t know whether the sullenness is from being caught or whether it’s from other emotions that are going on, but they haven’t expressed it to us.’

The Crumbleys were captured early Saturday in the basement of a building on the 1100 block of Bellevue Street in Detroit, less than half a mile from the Canadian border. They were taken into custody after leading authorities on a large-scale manhunt while fleeing involuntary manslaughter charges.

Bouchard said on Saturday afternoon that all three Crumbleys are now ‘segregated, each individually, in isolation’ at the county’s jail. They are not permitted to interact with each other and are on suicide watch.

‘There is no indication that any of them were suicidal, but out an abundance of caution our amazing corrections team is doing suicide watches on all three of them,’ Bouchard said. ‘They are in custody and in isolation.’