Jussie Smollett’s lawyer claims trial judge lunged at her when she asked for a mistrial during sidebar: Embattled Empire star’s attorneys also accuse him of ‘snarling’ at them 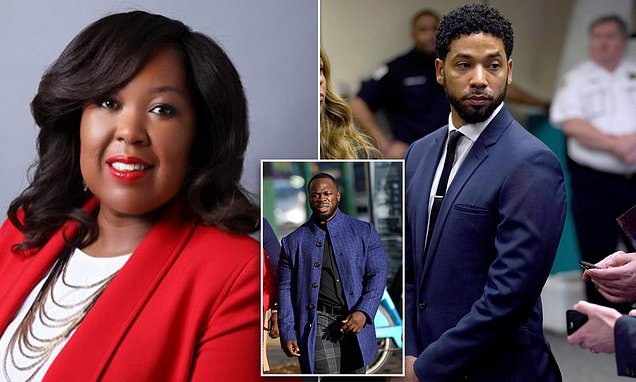 One of the attorneys representing Jussie Smollett (right) called for a mistrial Thursday, claiming the judge presiding over the case ‘lunged’ at her during Illinois court proceedings. Tamara Walker (left), one of several lawyers representing the embattled Empire actor, accused Cook County Judge James Linn of ‘physically lunging’ at her Thursday. The case looks to determine whether Smollet, an openly gay, African-American man, lied to police in 2019 when he said he was the victim of an alleged hate crime attack in Chicago in January of that year. Prosecutors allege that Smollett paid $3,500 to two brothers, Abimbola and Olabinjo Osundairo, to stage the attack, though Smollett vehemently denies such charges. On Thursday, Smollet’s legal team, particularly Walker, grilled Olabinjo (inset) about his past use of homophobic slurs.