Wow: Whoopi Goldberg Claims Men Can’t Speak Against Abortion Because They ‘Have No Idea’ What ‘a Fetus Wants’ 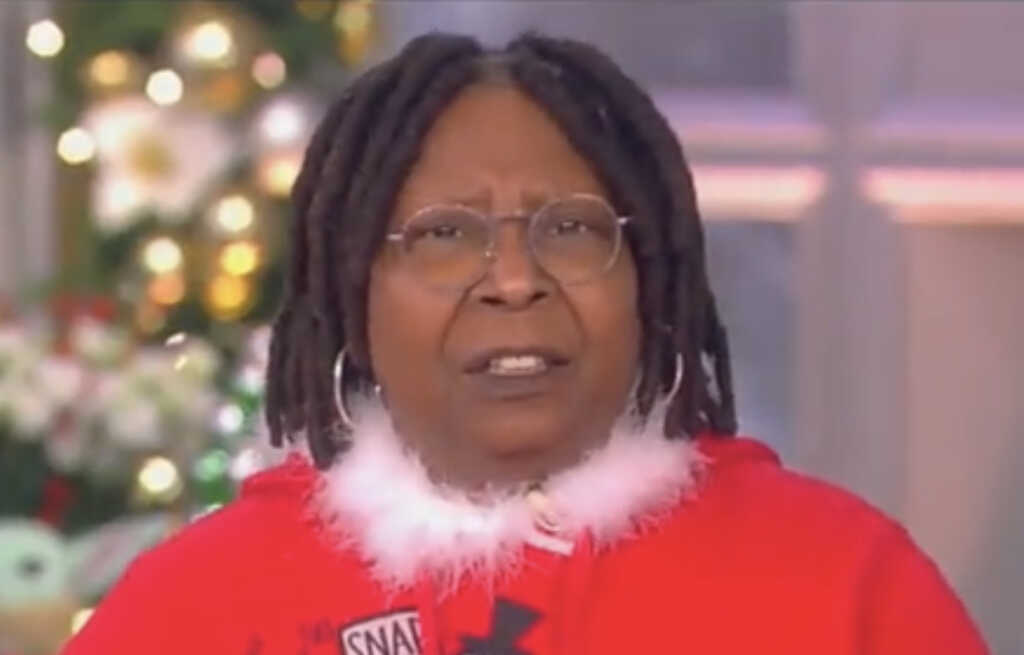 On Thursday morning, Whoopi Goldberg tore into men who speak out against abortion, arguing they “have no idea” what “a fetus wants.”

Goldberg launched the pro-abortion missive after playing soundbites from Wednesday’s hearing before the U.S. Supreme Court, when the nine justices heard oral arguments in the case Dobbs v. Jackson Women’s Health Organization, which is seen as a direct legal challenge of the precedent established in 1973, when the high court granted nationwide legal cover to abortion with its landmark decision in Roe v. Wade.

The case centers on a law in Mississippi that bans abortion after 15 weeks of pregnancy. Hanging in the balance of the Supreme Court’s ruling, which isn’t expected until summertime, is the fate of the state’s lone abortion clinic, Jackson Women’s Health Organization, which offers women abortions up to 16 weeks into pregnancy.

“Do any of you men have any eggs or the possibility of carrying a fetus?” Goldberg charged on “The View.” “How dare you talk about what a fetus wants. You have no idea.”

"Do any of you men have any eggs or the possibility of carrying a fetus? How dare you talk about what a fetus wants! You have no idea."

The lead co-host for the ABC talk show made the comments after playing audio of Chief Justice John Roberts asking: “Viability, it seems to me, doesn’t have anything to do with choice, but, if it really is an issue about choice, why is 15 weeks not enough time?”

Furthermore, Justice Amy Coney Barrett asked: “So, it seems to me, seen in that light, both Roe and Casey emphasized the burdens of parenting. Why don’t the safe haven laws take care of that problem? It seems to me that it focuses the burden much more narrowly.”

And Justice Samuel Alito questioned: “The fetus has an interest in having a life and that doesn’t change, does it, from the point before viability to the point after viability?”

Goldberg, for her part, went on to claim she is “fine if you disagree with abortion,” explaining: “My problem comes when you tell me what I need to do with my doctor and my family. How dare you. How dare you.”

How should we interpret Goldberg’s comments?
The 66-year-old celebrity’s diatribe against pro-lifers raises several questions.

Firstly, it is not only men speaking out against abortion. Barrett, the newest member of the Supreme Court, for example, is a woman. Secondly, a great deal of the prominent activists speaking out for the pro-life side are women, including former Planned Parenthood executive Abby Johnson and saline abortion survivor Melissa Ohden.

Goldberg, who is politically progressive, also made an argument many on the left would presumably categorize as transphobic, as she aligned herself with biological science, which purports only biological women are capable of becoming pregnant and carrying fetuses. Just a couple months ago, in early September, Rep. Alexandria Ocasio-Cortez (D-N.Y.) tripped over her words during a CNN interview, where she described biological women as “menstruating people” in an attempt to be inclusive of biological men who identify as female. During the same interview, she called women “people who do give birth.”

https://twitter.com/MaryMargOlohan/status/1435570371726618625?ref_src=twsrc%5Etfw%7Ctwcamp%5Etweetembed%7Ctwterm%5E1435570371726618625%7Ctwgr%5E%7Ctwcon%5Es1_&ref_url=https%3A%2F%2Fwww.faithwire.com%2F2021%2F12%2F02%2Fwhoopi-goldberg-claims-men-cant-speak-against-abortion-because-they-have-no-idea-what-a-fetus-wants%2FJust a few weeks later, the U.S. Centers for Disease Control and Prevention issued a bulletin urging “pregnant people” — instead of pregnant women — to get vaccinated against COVID-19. Around the same time, a leading medical journal, The Lancet, referred to women as “bodies with vaginas,” also an attempt to be inclusive of transgender-identified individuals. The publication, for what it’s worth, faced swift backlash, leading the editor to apologize for the phrasing.

Goldberg’s comments Thursday also beg the question: Is she suggesting that women — unlike men — are, in fact, somehow capable of communicating directly with fetuses and deciphering what it is they want? If that is the case, which it is not, it seems unlikely an unborn baby would announce a desire to be terminated in the womb.

“I’m certain a fetus does not want to be terminated,” tweeted Tony Shaffer.

Brian Sanders added: “Are we back to just [two] sexes again? It’s hard to keep up.”

“I think a fetus would probably want to not die,” observed Guy Benson. “I dare talk about it because it’s a free country and we are allowed to debate human rights issues here. And this type of rant ignores, per usual, the tens of millions of American women who disagree with abortion on demand.”