LA looters ransack Home Depot and Bottega Veneta stores on Black Friday despite Gov. Newsom’s claim he would crack down on ‘smash and grab’ gangs targeting luxury outlets across California 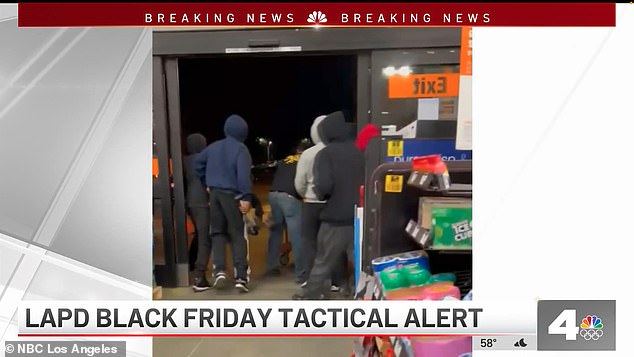 Roaming packs of thieves ransacked another luxury retailer in Los Angeles on Black Friday before descending on Home Depot despite California Gov. Gavin Newsom’s vow to crack down on the string of organized ‘smash and grabs’ plaguing the state.

The Bottega Veneta store in LA’s trendy Beverly Grove shopping district saw a large group enter the store at 5:21 p.m. and snatch pricey merchandise before one robber pepper-sprayed someone in the face, the LA Police Department reported.

At the Home Deport, in Lakewood, eight people made their way into the home improvement chain at 7:55 p.m. and stole sledgehammers, wrenches and hammers, threatened customers and then fled in 10 getaway cars.

The Los Angeles County Sheriffs Department told CBS that the Home Deport robbery was especially worrying because the tools stolen could likely be used to rob more stores in the area.

Sheriff’s deputies added that an entire section of sledge hammers was cleared out at the Home Depot, hammers similar to those that gangs of thieves have used to smash glass displays to nab jewelery and other high-end products, like iPhones.