(RNS) — A group of Liberty University students and alumni plans to hold a prayer rally on the school’s campus in Lynchburg, Virginia, on Thursday (Nov. 4), calling for an independent, third-party investigation of Liberty’s handling of sexual assault and harassment cases.

Abuse advocate Rachael Denhollander will speak at the rally, which will coincide with a dinner for Liberty’s board of trustees, which meets this week.

Denhollander, a former gymnast whose testimony helped lead to the conviction of former USA Gymnastics coach and serial abuser Larry Nassar, has become a leading voice in addressing sexual abuse among evangelicals.

This past summer, a group of 12 women, including former Liberty students and employees, sued the evangelical Christian school, alleging that its policies made it “difficult or impossible for students to report sexual violence.” In late October, the school’s former spokesman also filed a suit, claiming he was fired after criticizing school leaders, including President Jerry Prevo, for how they responded to sexual assaults on campus.

In addition, a recent ProPublica story said that several students who reported assaults were warned that they could be punished for violating the Liberty Way, the school’s honor code, which limits meetings between male and female students. 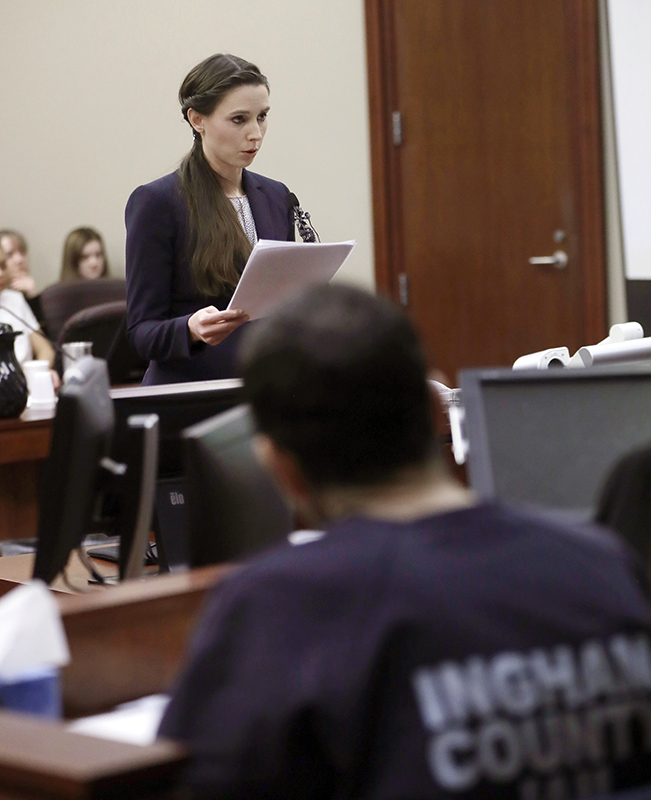 Denhollander plans to hold a news conference at the Craddock Terry Hotel in Lynchburg before the rally, with Dustin Wahl, founder of the Liberty alumni group Save17; former Liberty professor Karen Swallow Prior; and members of Justice for Janes, a student group calling for campus reforms at Liberty.

Under former Liberty President Jerry Falwell Jr., speakers who called for prayer rallies that criticized the school were banned from campus. In 2018, campus police escorted Christian author Jonathan Martin off school property the night before a planned protest, a decision Falwell later defended. Author and speaker Shane Claiborne was also barred from campus.

“We feel that someone of Rachael’s caliber will be listened to,” said Dahl.

A university spokesman said outsiders are not allowed to protest at the school.

“Liberty University’s campus activities are reserved for residential students, faculty and administration. Demonstrations that are planned well in advance, for which space is requested and reserved are permitted on Liberty University’s campus, as long as they involve residential students, not the general public,” the spokesperson told Religion News Service in a statement.

Organizers said they still plan to move ahead with the rally despite the statement from the university and that Denhollander still plans to be there.

Denhollander was welcomed to Liberty in 2018, when she taught at a class session at the university’s law school and spoke at the university’s convocation, telling her story and telling students about the need for justice for abuse survivors. Several clips from her testimony at Nassar’s sentencing hearing were also played during that convocation.

“I ask that you hand down a sentence that tells us that what was done to us matters, that we would know we are worth everything,” she told a judge in one of the video clips. “Worth the greatest protection the law can offer, the greatest measure of justice available.”

In Twitter post, Denhollander mentioned her 2018 invitation to speak on campus about how to respond to sexual assault and abuse. “Today, when it is needed, it is no longer wanted. Aching to see a heart change tomorrow,” she tweeted.

On Thursday, organizers sent out an update on social media, saying that — after initially barring Denhollander from campus — university leaders had changed their minds and would allow her on campus to speak at the rally. The social media update also said that Denhollander would meet with Prevo and with Liberty campus pastor Jonathan Falwell.

While Denhollander, Prior and event organizers were holding a press conference, a university spokesman told RNS that no rally was scheduled on campus.

“Liberty University rallies and marches must be sponsored by residential students. Liberty welcomes intercession for our community and there are an abundance of places adjacent to campus that do not require prior approval,” the spokesman said.

Prior, who taught English at Liberty for two decades before leaving the faculty in 2020, said the rally is an attempt to hold the school’s board accountable for long-delayed reforms. While the Liberty board announced plans for an investigation into the troubled tenure of Falwell Jr., who resigned in 2020, that report has not been made public.

When Falwell Jr. departed, Prior and others hoped that things would change for the better at Liberty. So far, those hopes have not come to pass under Prevo, who was named acting president after Falwell Jr.’s departure.

“I think he has been a disappointment,” said Prior, who is a columnist for RNS. “I am less hopeful than I was a year ago.”

Founded by the late televangelist and religious right preacher Jerry Falwell Sr., Liberty University is one of the largest Christian schools in the United States, with total assets of more than $3 billion.