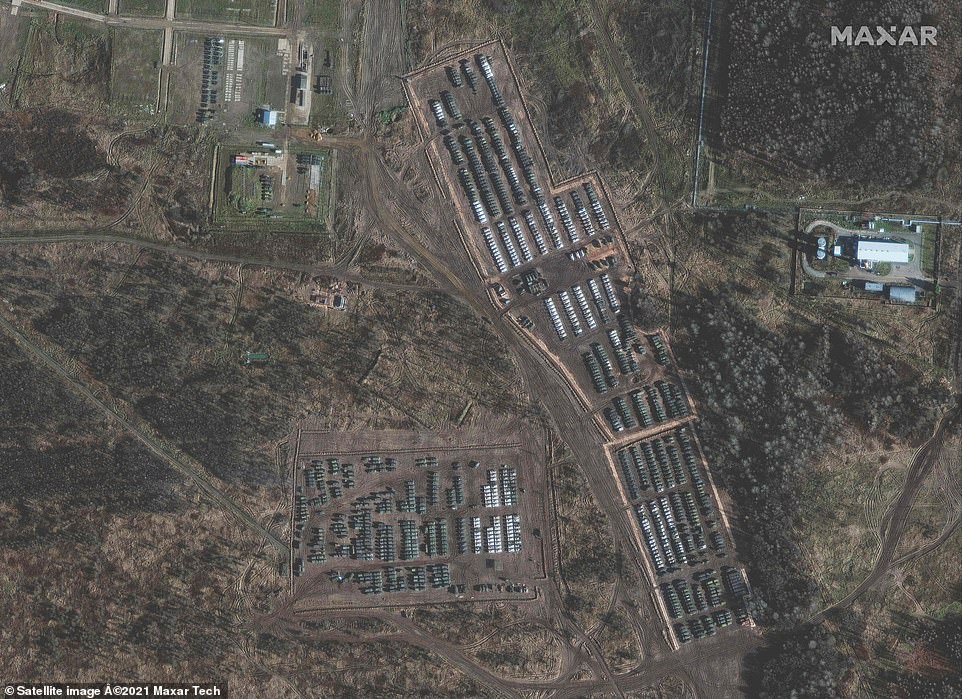 US officials are concerned by satellite images appearing to show a fresh build-up of Russian troops on the country’s border with Ukraine – but the Kremlin has dismissed the ‘low-quality’ claims.

Ukraine has also denied reports of a Russian military building up near its eastern border that raised fears of a new escalation in fighting with pro-Moscow separatists.

Satellite images appeared to show a build-up of tanks, armoured units and self-propelled artillery as well as ground troops, near the Russian town of Yelnya, which is close to the border of Ukraine and Belarus.

Pentagon spokesman John Kirby told reporters on Monday that Washington was monitoring the situation and US officials told the Washington Post they were concerned.

But Ukraine’s defence ministry said in a statement late Monday that ‘no additional deployment’ of Russian forces had been observed near the border.

The ministry said the published videos could be an ‘element of special informational and psychological actions’ and showed a planned movement of troops after a Russian military exercise.

Kremlin spokesman Dmitry Peskov on Tuesday also dismissed the reports of a potential build-up, saying there was no need to ‘waste time’ on ‘low-quality’ claims.

‘The movement of our military equipment and army units… is exclusively our business,’ he told reporters. ‘Russia has never threatened anyone.’

It comes after a US official, speaking on the basis of anonymity, told the Washington Post that there had been some movement, though not as large as the surge in Moscow’s forces earlier this year.