Massive 9,000sq-ft mosaic floor with stunning images of a lion attacking a deer and two gazelles that symbolize peace is unearthed at the Hisham Palace in Jericho 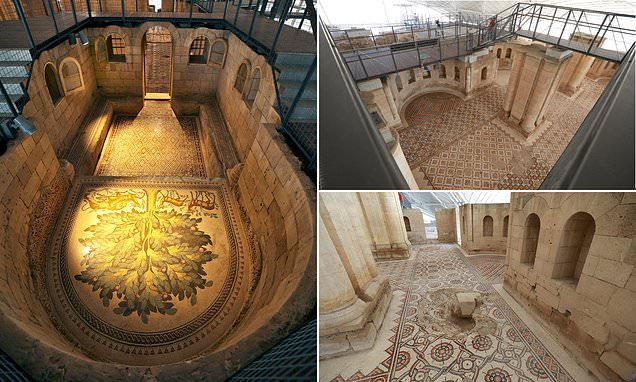 After years of $12 million restoration project, the Palestinian Tourism and Antiquities Ministry unveiled one of the largest floor mosaics in the world, in the West Bank city of Jericho.

Resembling a fine carpet, the vast mosaic covers 8,998 square feet of Hisham’s Palace, an Ummayad desert castle dating from to the eighth century.

One tableau includes a scene of a lion attacking a deer, symbolizing war, and two gazelles eating, symbolizing peace. Both sets of animals are under what Jericho Governor Majed Al-Fityani called ‘the tree of life.’

In all there are 38 different panels made from more than five million pieces of stone, Haaretz reported, including delicate floral and geometric designs composed of 21 colors, including red, blue and ochre stones.