What a Shame: Kentucky High School Is Investigated After Students Appear to Give Teachers and the Principal Lap Dances During Homecoming Week Festivities 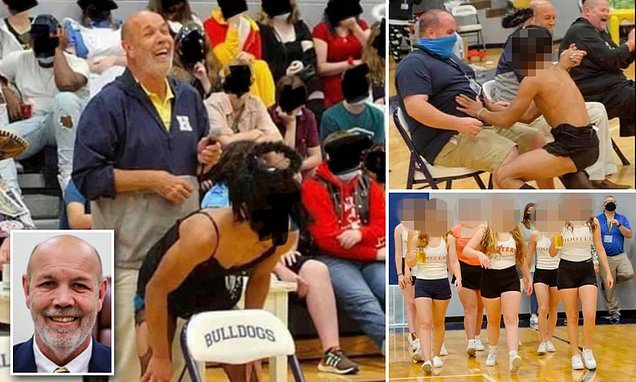 Photos that appear to show students giving teachers and the principal – who is also the mayor of their town – lap dances during a homecoming week ‘man pageant’ have shocked a Kentucky town.

The photos caught national attention when a Twitter user shared them from Hazard High School’s own Facebook page, which has since taken the pictures down.

The photos appear to include cheerleaders dressed in Hooters waitress uniforms and carrying what appeared to look like alcohol, as well that purports to show a male student giving school principal Donald ‘Happy’ Mobelini – also the mayor of Hazard – a lap dance. There were allegedly also ‘paddlings’ given out.

DailyMail.com has reached out to both the mayor and his assistant for comment.

Superintendent of Schools Susan Combs has launched an investigation.

The school Facebook page promoted the event as part of homecoming week.