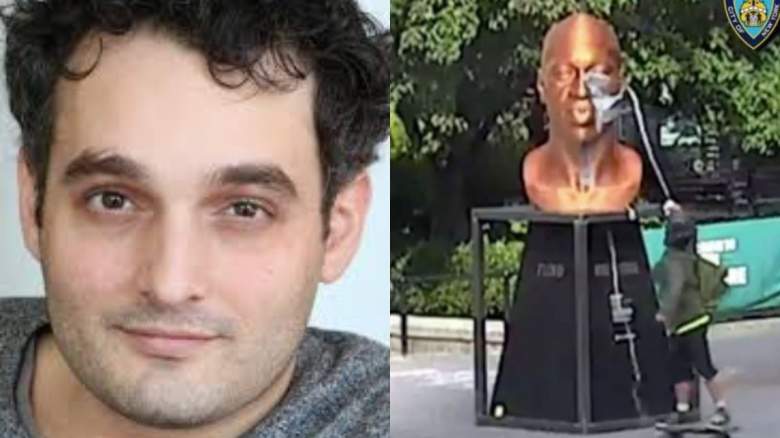 The white skateboarder accused of hurling silver paint over a George Floyd statue at a Manhattan park is being questioned for another crime after he was ordered released without bail.

Micah Beals, of Maspeth in Queens, was arraigned in Manhattan Criminal Court early Tuesday after being charged with second-degree criminal mischief for allegedly defacing the statue at Union Square Park at around 10am on October 3.

As he was being released, detectives took him back into custody in connection to another case involving possession of an ammo clip, The Daily News reported.

Details surrounding the ammo clip investigation were not immediately available.

The 37-year-old failed actor has prior convictions in Michigan, California and Washington state. He also has a case pending against him in Washington D.C. for his alleged involvement in the January 6 insurrection at the U.S. Capitol.

Beals, who has scored bit-parts in Parks and Recreation as well as CSI, was arrested around 4.30am Monday after investigators allegedly determined he was the skateboarder caught on video defacing the the Floyd statue.

Footage released after the incident showed a man, wearing a dark green jacket, a neon green T-shirt, black shorts, black and white sneakers and a black beanie walking along the park carrying his skateboard in one hand.