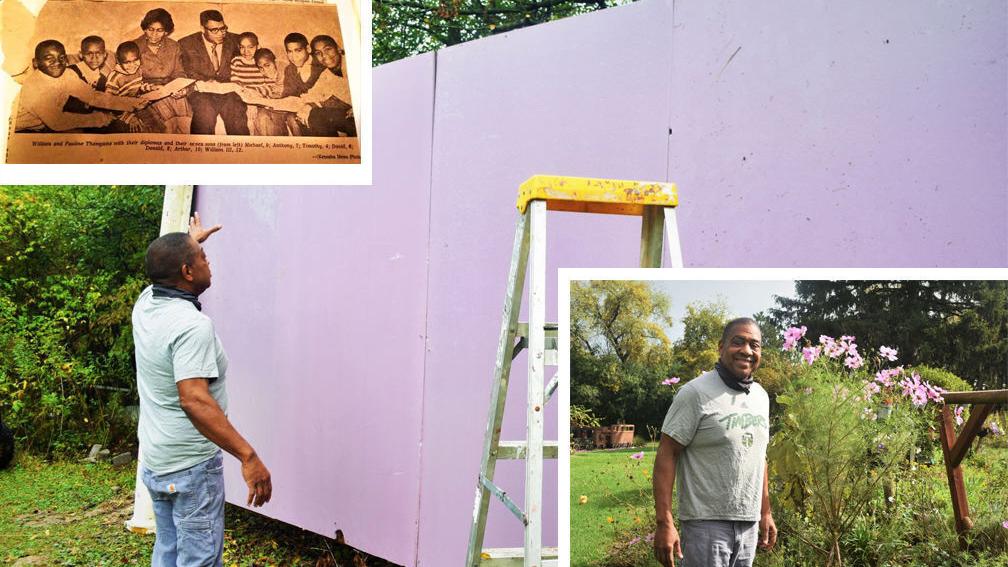 Pastor Tyrone Patrick’s grandfather, Robert Patrick, worked picking cotton in Mississippi and could “out-pick anybody.” The more cotton he picked, the more money he made, because he was paid by the pound.

With 14 children to help raise in the late 1960s, however, Robert Patrick needed a better opportunity. So, in 1969, the Patricks packed up and moved from the South to the North, driving to Chicago before eventually settling in Waukegan, Illinois.

“He (Robert) had one of these huge wagons … and he loaded up the family and we didn’t have any furniture … he loaded up that wagon with his family, as many as he could fit in there, whoever else helped bring him up here,” Tyrone said.

The Patricks were among the 6 million black people who relocated from the rural South to cities in the North, West and Midwest from 1916 to 1970 for better socioeconomic opportunity, part of a historic movement called the Great Migration.

Robert Patrick’s name, along with other members of Tyrone’s family who partook in the Great Migration, will soon be honored in an exhibit being built at Nehemiah Gardens, the Racine Journal Times reported.

The exhibit will be made up of walls covered in the written names of local black individuals who moved to southeastern Wisconsin and northeastern Illinois during the Great Migration. It is to be unveiled and dedicated on Oct. 30.

The garden’s founder and main coordinator for the new exhibit, Pastor Bill Thompkins, said he is looking for more names to fill the walls with, which he envisions will one day have several thousand names. The purpose of the new exhibit is to “remember, honor and celebrate” those black migrants, Thompkins said.

“We honor all of the greats — the Kings, the Tubmans — but these were migrant families who came courageously … to give their families another opportunity,” Thompkins said.

Since announcing the project, Thompkins has received plenty of interest from the community, with some telling him that it’s desperately needed in order to honor migrants — especially as they’re dying.

A lot of these migrants might also have been part of the Civil Rights Movement — a fight for equality and rights for blacks in a time of segregation, racism, protests and demonstrations — that took place in the 1950s and ’60s.

“I remember when I watched the Civil Rights Movement as a young black man, I was shocked by the treatment of the people, proud of the courage of the people who came … but their names are nowhere,” he said.

Bill Thompkins came to Wisconsin by way of his father William Thompkins’ migration from Arkansas to Illinois.

What prompted William, a Korean War veteran, to move out of then-segregated Arkansas, Bill said, was an incident he witnessed of a black boy being dragged up and down a dirt road. Not only were black people migrating to the North for economic opportunity, but they also were fleeing brutal racism in the South.

“I was 2 years old … he came back from the army to Arkansas and witnessed (the incident) … he realized he had to get his family out of there,” Thompkins said.

The family eventually settled in Kenosha, where William worked at the American Motors plant. Some Christmases, William donned a raggedy Santa Claus suit, and even wore a white Santa Claus mask, just to give a treat to young black kids.

Once William learned how to read and write, he became a civil rights advocate in the community — a testament to how blacks who partook in the Great Migration benefited from opportunities in education and often participated in the Civil Rights Movement at the same time.

Bill said he hopes the exhibit will teach young people about the Great Migration and come to feel thankful for those that came before them: “We’ve come from generations of people that helped us.”

There is no mandate in Wisconsin that requires schools to teach black history, WMSN-TV in Madison reported. However, the Wisconsin Department of Public Instruction does encourage districts and educators to include black history in their curriculums.

“I actually experienced being integrated into a school system back then when they were still integrating schools,” Patrick said. “I remember integrating into a majority-white school.”

Patrick said when he tells his grandchildren about his experience, it’s “strange to them. Because it’s the norm for everybody to go to school together. But when they hear about those stories, it’s exciting, too, because they haven’t been taught that history … they want to know the past.”