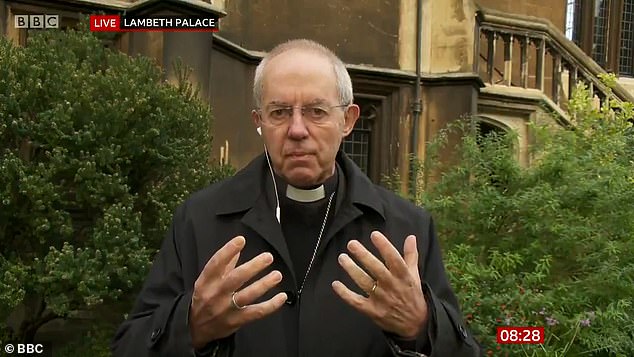 Vulnerable people could face ‘intangible’ pressure to end their lives if the law on assisted dying is relaxed, the Archbishop of Canterbury has warned.

The House of Lords will on Friday debate a new bill to enable terminally ill adults to legally seek assistance to end their lives.

Archbishop Welby, 65, who lost his seven-month old daughter Johanna in a car crash in France 38 years ago, said spending time with people who wanted to die and with those at the end of their lives made him wary of the Bill.

‘In hospices where people are there because they have a terminal illness,’ he told BBC Breakfast.

‘I’ve spent time with people with children who were took.

‘I’ve seen my own child at the very end of her life. I’m very well aware of this.

‘That’s what makes us so apprehensive about this.’

The archbishop, who has five other children with wife Caroline, has previously said that Johanna’s death is a ‘constant reminder of the uncertainty of life’.

The Assisted Dying Bill, tabled by the independent peer Baroness Meacher, gives patients of sound mind with six months or less left to live the right to die by taking life-ending medication.

Campaigners argue a change in the law would give those at the end of their lives greater control over how and when they die.