There’s a devil loose: 19-year-old Swedish rapper Einar mimes throat-slitting in his last video hours before he was shot dead ‘execution-style’ amid feud with rival artist’s gang who ‘kidnapped, beat and sexually assaulted him’ 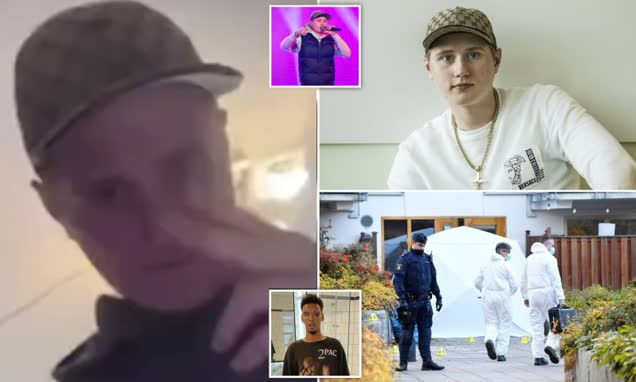 Reports said 19-year-old Einar, whose real name was Nils Kurt Erik Einar Grönberg, was shot in the head and chest in the port of Hammarby Sjöstad ‘execution style’. Officers were alerted to the incident at 10:50 pm last night, officials said, but paramedics were unable to save the victim, and he died at the scene. He had reportedly been living under death threats for a long time and his identity was being protected. The shooting is suspected to be linked to gang conflicts in the city – an issue that has been growing over the past decade. In April last year, he was kidnapped and held at gunpoint for several hours, and his kidnappers took pictures of him which they posted on social media to humiliate him. Right: Police and forensic officers at the scene and outside Einar’s home in Stockholm. The murder of Einar comes three months after rival rapper Yasin (pictured bottom inset) was jailed for 10 months for masterminding a foiled plot to kindap Einar. Pictured left: In a video shared by Swedish news website Expresson, reportedly Einar’s last before he was killed, he is shown with another Swedish artist VC Barre. The pair are shown gesturing to a mobile phone camera, before Einar mines a ‘throat slitting’ motion with his thumb and then points at the camera.