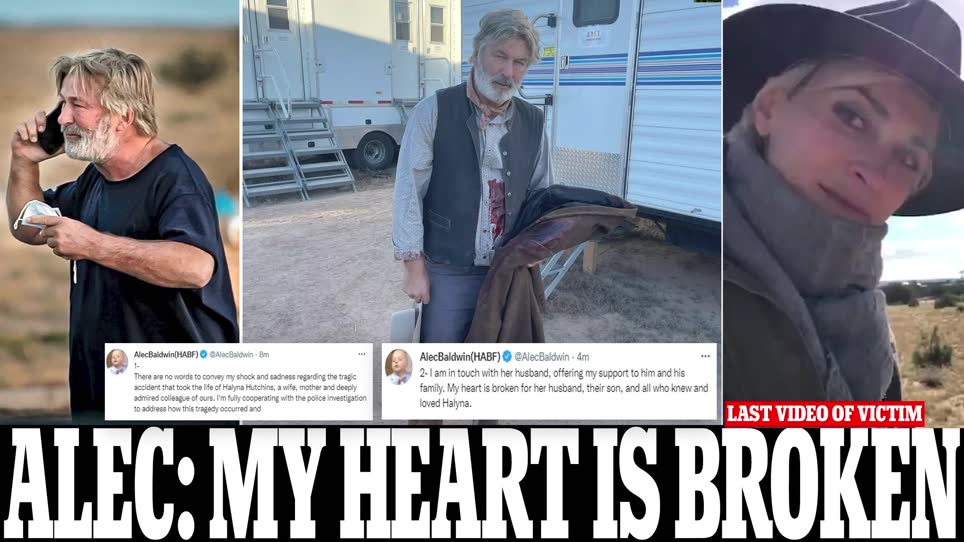 Alec Baldwin said on Friday that his heart is ‘broken’ after accidentally shooting and killing the female cinematographer on the set of his new movie Rust, but that he was cooperating fully with the police and was in touch with the woman’s grieving husband. Baldwin accidentally killed Halyna Hutchins, a 42-year-old married mother-of-two and the Director of Photography on his new movie on a ranch in Santa Fe, New Mexico, on Thursday at 1.50pm. He is believed to have fired a single round from a prop gun that somehow struck both Hutchins and the movie’s director Joel Souza. Witnesses cited by Showbiz 411 said the single bullet struck Hutchins in the body, and pierced Souza’s clavicle. Hutchins was airlifted to the hospital but was pronounced dead. Souza, 48, was taken to the hospital by ambulance but was released on Thursday evening. Baldwin was taken to the sheriff’s department to be questioned. He was released without charge after giving a tearful interview. Afterwards, the 63-year-old was photographed doubled over in shock and grief as he spoke on the phone. In two tweets on Friday, Baldwin said: ‘There are no words to convey my shock and sadness regarding the tragic accident that took the life of Halyna Hutchins, a wife, mother and deeply admired colleague of ours. ‘I’m fully cooperating with the police investigation to address how this tragedy occurred and I am in touch with her husband, offering my support to him and his family. ‘My heart is broken for her husband, their son, and all who knew and loved Halyna.’