Black Trump Supporter Fan Who Did Not Go to Jan. 6 Capitol Siege Gets Longest Riot Sentence Yet of 14 Months After Posting Online Threats to Target RINO ‘Traitors’: Blames Color of His Skin for ‘Unfair’ Punishment 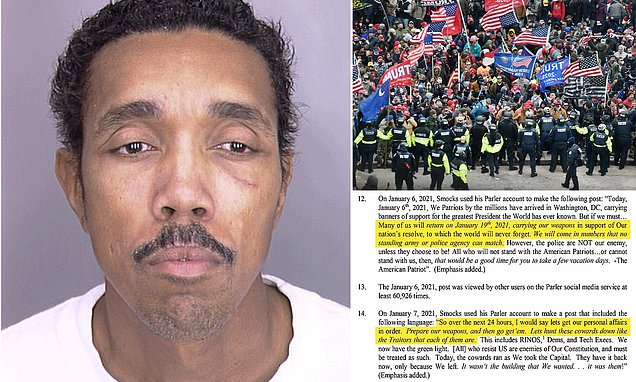 A federal judge has handed down the harshest punishment yet for someone involved in the Capitol riot on January 6, sentencing a Texas man who was not physically present at the riot to 14 months in prison.

Troy Smocks, a black man from Dallas, had admitted posting threatening social media messages online the day after the riot from a Washington, D.C., hotel room.

His sentence is the longest term to date resulting from the federal investigation of the incident at the nation’s capital.

‘I’m no Dr. [Martin Luther] King, but we do share same the skin color and the same idea of justice. I just want to be treated equally,’ Smocks said at his sentencing, after claiming he was being treated more harshly during court proceedings due to the color of his skin.

Chutkan, who is also black, rejected requests from Smocks’ attorney for a time-served sentence at the low end of eight to 14 months, recommended by federal guidelines, and dismissed the defendant’s claim that his sentence was unnecessarily harsh because of the color of his skin.