250 years ago, Methodism came to the US. These 3 churches show how it spread. 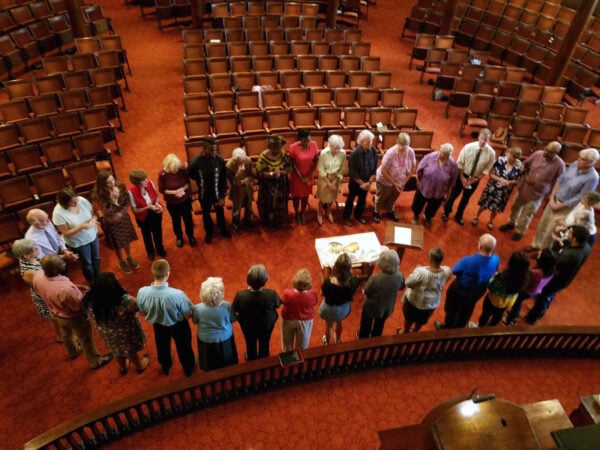 (RNS) — It was 250 years ago this month that Francis Asbury, who’s been called the “architect of the Methodist church in the States,” first arrived from England in what is now the United States of America.

Asbury wasn’t the first Methodist to bring the fledgling faith to the New World — Irish immigrants hold that distinction — but he was tasked by John Wesley himself, the leader of the revival movement within the Church of England that became Methodism, to organize the growing church.

And organize he did.

Under his leadership, the number of new Methodists outpaced the general population growth in the U.S.

As Methodists in both the U.S. and Great Britain celebrate the anniversary of the Asbury crossing with a number of special events, here is a glimpse of how Methodism spread after his arrival, told through the stories of three historic churches across the country.

Lovely Lane United Methodist Church, Baltimore
When Asbury arrived in Philadelphia on Oct. 27, 1771, after more than seven weeks at sea, it was the city’s St. George’s Church that welcomed him.

But it’s Lovely Lane United Methodist Church in Baltimore that is remembered as the “mother church of American Methodism,” according to its website. It was there that Asbury, in December 1784, called all Methodist preachers in the U.S. to meet for what’s become known as the “Christmas Conference.”

Lovely Lane, which averages about 75 worshippers on a Sunday, takes seriously its role as mother church, according to its pastor, the Rev. Debbie Scott.

That legacy motivated the church’s decision three years ago to become a Reconciling congregation, affirming LGBTQ United Methodists at a time when the larger denomination is threatening to split over their inclusion, Scott said.

“We want to be very clear, as the mother church, that this mom welcomes all,” she said.

When the neighborhood around it became an arts district, Lovely Lane began hosting art exhibitions. When the Baltimore Lab School moved in next door, it opened its gymnasium and basketball court to students.

“It is a congregation that is steeped in history, but recognizes it needs to be a community center for today and tomorrow,” Scott said.

Recently, the church raised $1.3 million to make upgrades to its current building, built in 1884, she said. Its stained-glass windows list the name of every pastor who has served the church, beginning with Asbury and ending with Scott.

“How daunting it is to stand in the pulpit at Lovely Lane!” she said.

Shiloh United Methodist Church, Shiloh, Illinois
As Americans spread across the country, they brought Methodism with them.

This was part of the design of Methodism, said Ashley Boggan Dreff, general secretary of the General Commission on Archives and History. A preacher would constantly travel the same 250-mile circuit on horseback, establishing Methodist societies or classes in the communities he encountered along the way.

“The minister would keep coming back on that circuit every six weeks, but, in between that, it was up to the laypeople in that community to grow Methodism while the preacher was on the circuit,” Dreff said.

Circuit riders took Methodism south almost immediately, then west, founding what is now First United Methodist Church at Chicago Temple in 1831, six years before the city of Chicago was incorporated.

In other places, everyday Methodists formed camp meetings, which were a “new religious phenomenon on the frontier,” according to the GCAH.

There had been a Methodist class in the area since 1793, led by Capt. Joseph Ogle, a Revolutionary War veteran who had moved west from Virginia because of his opposition to slavery, according to a history of the church on Shiloh’s website.

The class organized a camp meeting in 1807, an 11-day revival at what was then called Three Springs. At its conclusion, Ogle’s class was constituted as a church and Shiloh’s original log cabin structure built.

“I think a lot of churches started that way — they would form a Methodist class, and basically the circuit rider would come along and consecrate the class,” said the Rev. Ken Hutchens, directing pastor of the church.

The church has almost closed several times in the following centuries, dropping to five members at one point, according to Hutchens. But revival broke out again in the 1980s, when a neighboring church sent one of its associate pastors to help the struggling church and the village boomed as a suburb of St. Louis.

Shiloh, which now averages around 200 people on a Sunday, has taken on “a real strong evangelical flavor” — every United Methodist church reflects its surrounding community, Hutchens said.

“Although it is also one of the oldest Methodist churches around, so it has that history as well, and people are very proud of the history,” he said.

Newtown Indian United Methodist Church, Okmulgee, Oklahoma
Circuit riding fell off after Asbury’s death in 1816, according to Dreff, but Methodists continued to answer Wesley’s call to take the gospel to people everywhere.

The Methodist Foreign Mission Society sent a mission to Indigenous peoples in the Pacific Northwest, setting up headquarters in Oregon’s Willamette Valley in 1833.

And when, in the 1830s, the U.S. government began forcing Indigenous peoples west from eastern and southeastern states to what it then called “Indian Territory,” some Choctaw, Cherokee and Muscogee people brought Methodism with them, according to the Rev. David Wilson, assistant to the bishop of the Oklahoma Indian Mission Conference.

The people already had encountered the faith in Tennessee, Mississippi and Georgia, said Wilson, who is a citizen of the Choctaw Nation of Oklahoma. They composed hymns along the Trail of Tears that still are sung and, when they settled in what is now Oklahoma, they built Methodist churches that still are used today.

“They were doing so well that someone took notice and said, ‘These Native folk need their own conference,’” he said.

Its oldest church is Newtown Indian United Methodist Church in Okmulgee, Oklahoma, which was founded in 1841 by Samuel Checote, one of the first ordained ministers from the Muscogee Nation, according to the conference.

Checote was 10 years old when he and his family were forcibly removed from Alabama and relocated to Oklahoma, according to Wilson. The child’s interest in Christianity was sparked not long afterward when he saw missionaries baptizing people in a river.

But — because of their mistreatment by the U.S. government, which, in many ways, was difficult to separate from the church — the Muscogee had outlawed Christianity. Checote was whipped for his faith before successfully petitioning the Muscogee Nation to lift its prohibition on Christianity, according to Wilson.

Checote went on not only to be ordained in the United Methodist Church, but to become its first Native American district superintendent. He is credited with starting churches in both the Oklahoma Indian Mission Conference and the largely white Oklahoma Annual Conference, Wilson said.

Today, Newtown counts about 100 members and sees about 30 on a given Sunday, including a number of Checote’s descendants. The Oklahoma Indian Mission Conference includes 6,000 members across more than 80 churches, according to its website.

Its focus has shifted to urban ministries, following members as they move from tribal communities to larger cities, Wilson said. Many churches are bringing in bilingual people to teach Native languages. They’re also involved in disaster relief.

And the conference’s impact is felt beyond Oklahoma.

“Some of these churches around the country were started by Indian Methodist pastors — California, Arizona, New Mexico,” Wilson said.

“We’re proud of the fact that wherever we went, because of our knowledge of Methodism, they helped to create churches while they were there.”