Queen Elizabeth II Spends a Night in London’s King Edward VII’s Hospital and Undergoes ‘Preliminary’ Tests After Sudden Cancellation of Visit to Northern Ireland. In Recent Messages to Queen Elizabeth II, Daniel Whyte III Has Been Basically Telling Her to Get Your House in Order as the Prophet Isaiah Told King Hezekiah. Here Are the Recent Articles: 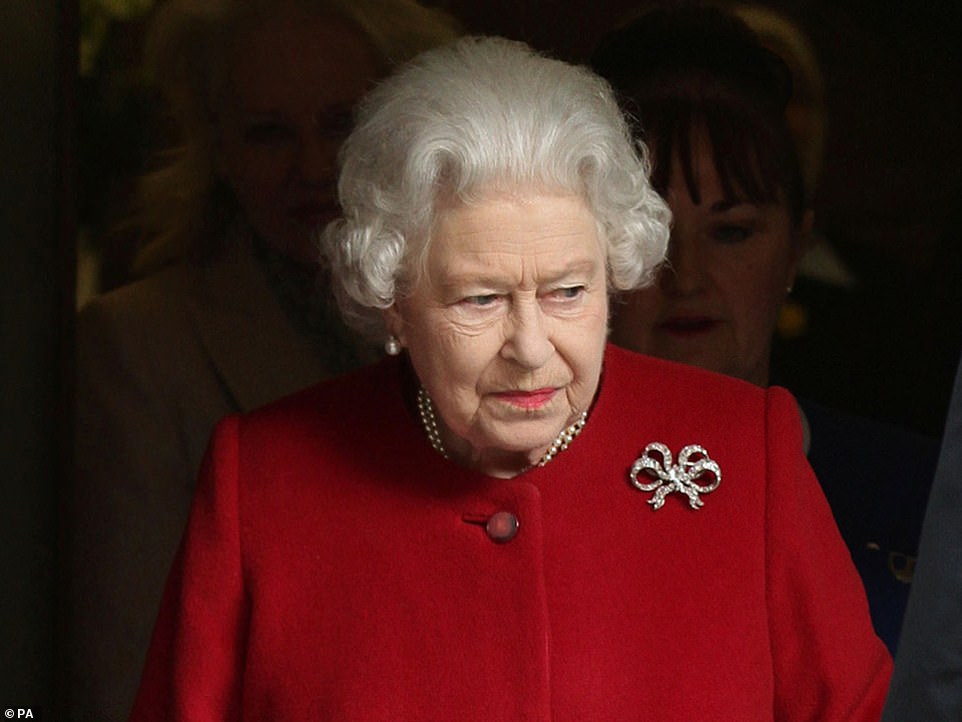 The Queen spent the night in hospital for tests just hours after dramatically cancelling an official trip to Northern Ireland to mark the 100th anniversary of the partition of the island.

Royal doctors ordered Her Majesty, 95, to rest and advised her to miss a trip to the province, sparking speculation about the reason for the eleventh-hour cancellation.

It is understood the trip to the private King Edward VII’s Hospital in London on Wednesday afternoon was expected to be for some ‘preliminary investigations’, and that the overnight stay was for practical reasons. For these reasons, as well as in order to protect the Queen’s medical privacy, the visit was not announced by Buckingham Palace at the time.

The Palace said that the monarch was discharged yesterday morning and returned to Windsor Castle at lunchtime, where she is expected to recuperate for the rest of the week. She was not thought to have had an overnight hospital stay since March 2013, when she was treated for a stomach bug.

Daniel Whyte III Tells Her Majesty Queen Elizabeth, Here’s Your Next Queen Right Here, Kate Middleton, Who by the Way Represents the Monarchy and You Better Than the Rest of the Royals Combined. For Your Kingdom’s Sake, Skip Charles and Camilla. Neither Are Worthy of Your Throne and Crown Which You Have Carried With Great Dignity. 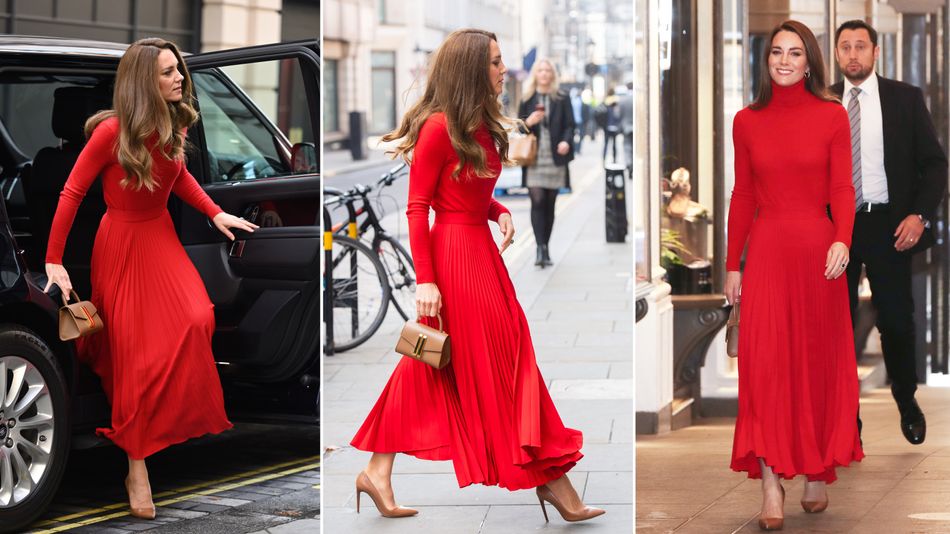 The Duchess of Cambridge looked radiant in a bold red ensemble as she joined TV presenting duo Ant and Dec at an addiction awareness event in London.

Kate, 39, donned a pleated scarlet midi skirt and a matching fitted turtleneck for the engagement at the BAFTA headquarters in Piccadilly, accessorising with towering Ralph Lauren point toe pumps and a £295 micro-handbag from DeMellier.

The event, hosted by drug and alcohol dependence charity the Forward Trust, was hosted by Ant and Dec and saw the Duchess deliver a keynote address in which she said ‘anyone’ can become an addict.

‘Addiction is not a choice. No one chooses to become an addict. But it can happen to any one of us. None of us are immune,’ Kate said, launching the charity’s ‘Taking Action on Addiction’ campaign.

‘Yet it’s all too rarely discussed as a serious mental health condition. And seldom do we take the time to uncover and fully understand its fundamental root causes.’

Ant, who has received treatment for drink and drug addiction, was supported at the event by his wife, Anne-Marie Corbett. Dec attended with his wife Ali Astall.

Daniel Whyte III, President of Gospel Light Society International, Tells Her Majesty Queen Elizabeth II, if You Want to Extend Your Kingdom at Least a “Little Bit” Further, You Would Be Wise to Make Prince William King and Not Prince Charles, for as You Know Queen Elizabeth, the Former Archbishop of Canterbury Robert Runcie Said the Advent of King Charles III Would Provoke a Constitutional Crisis Because the Church of England Has Never Crowned a Divorced Man as King, and Therefore SUPREME GOVERNOR OF THE CHURCH OF THE LORD JESUS CHRIST, Let Alone One Who Has Publicly Committed Adultery and Publicly Confessed to Adultery With the Relevant Woman, Camilla Parker Bowles, Who Is Also a Divorcee, Sitting Beside Him, Expecting to Be Crowned Queen (Now, Queen Elizabeth, You Know in Your Heart That Camilla Parker-Bowles Is Not Worthy of Being Called Queen. She Is a Disrespectful Untrustworthy Whore. And You Know That Your Son Charles Is Not Worthy of Being Called King. He Is a Disrespectful Untrustworthy Whoremonger, and Nobody Is Going to Follow Them, for as You Know Queen, One of the Reasons Why You Have Authority and You Are Honored and Respected by People Around the World Is Because You Married One Man and Stayed With Him Until Death Did You Part, and Without Much Drama. Excuse the Expression Queen Elizabeth, but These Two Are a Damn Disaster That Has Already Happened). Besides, Prince William Has Shown Some Kingly Testicular Fortitude This Past Week by Rebuking Billionaires for Their Foolishness of Repeatedly Going Up Into Space for a Joyride and Telling Them That They Need to Use Their Billions to Take Care of Earth First. Your Grandson William Said What Most Common People Have Been Thinking All Along and That Wise Rebuke Against Some of the Most Powerful Men in the World Shows That William Ought to Be King and Not Charles. Queen, I Think This Might Be a God Moment of Decision for You. And Queen, as I Have Shared With Thousands of People Through My Preaching Around the World, Divorce and Remarriage Is a Violation of God’s Word and the Words of Jesus Christ Himself and Letting Divorced and Remarried People Into the Church as Members, Not to Mention King and Queen Over the Church, Opens the Door for Homosexuals and Lesbians and So-called Same-sex Marriage Couples Which Is All an Abomination in God’s Sight as You Well Know Queen Elizabeth. This Opens the Door for Homosexuals and Lesbians to Enter the Church as Members, Because These People Will Tell the So-called Church Leaders That You Have No Authority to Keep Us Out of the Church as Members Because the Bishops and Priests and the King and Queen Have Not Obeyed God’s Word in Both the Old Testament and New Testament by Allowing Divorce and Remarriage and by Being Divorced and Remarried Themselves in the Worst Possible Way. That Being Said, You Need to Make Clear Before You Leave This Earth to Meet Your Maker That Homosexuals Cannot Be Members of the Church (They Can Visit the Church, but They Cannot Become Members, and Therefore They Cannot Be Married in the Church) and You Need to Make It Clear That No Bishop or Priest Can Be a Homosexual or a Lesbian and No Homosexual or Lesbian Can Sit on the Throne of the United Kingdom. Queen Elizabeth, if You Do Not Do These Things, Along With the Other Things I Have Told You to Do, After You Die, Your Kingdom Will Disintegrate to Nothing. As in the Case of King Belshazzar, Who Was the Son of King Nebuchadnezzar, the Handwriting Is on the Wall, and “God hath numbered thy kingdom, and finished it. Thou art weighed in the balances, and art found wanting.” Queen Elizabeth, Do Not Be the Monarch Who Destroys the One Thousand, Two Hundred (1,200)-Year United Kingdom Because of Gross Sin, Abominable Behaviour, and Immorality. “Dieu Et Mon Droit.” This Is Your Kingdom’s Motto Which Means “God and My Right.”.

The former Archbishop of Canterbury, Robert Runcie, had told Anthony Holden – at the time, of course, unattributably – that the advent of King Charles III would provoke a constitutional crisis.

The Church of England has never crowned a divorced man as King, and so supreme governor of the Church, let alone one who has publicly confessed to adultery – with the relevant woman, also a divorcee, sitting beside him, expecting (whatever the Palace may say in the meantime) to be crowned Queen. 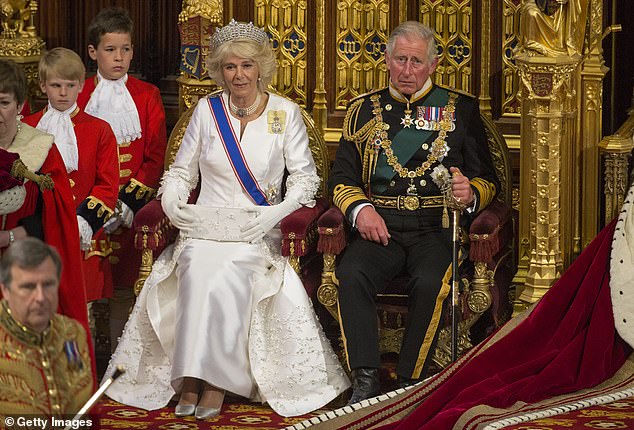 Given the convention that Parliament does not debate the Monarchy without the Monarch’s consent – it is his or her Government, after all, not ours – this would require the Prime Minister of the day to go and seek the new King Charles III’s permission to debate whether or not it felt able to crown him.

All that is yet to come, and who knows where we will find ourselves by then.

Share or comment on this article: How the Palace threatened to cut me dead if I revealed the Queen breastfed Prince Charles