There’s a devil loose: US-Pakistani man, 30, accused of raping and beheading Pakistan ambassador’s daughter, 27, after torturing her with a knuckle duster when she refused to marry him faces death penalty as he goes on trial in Islamabad 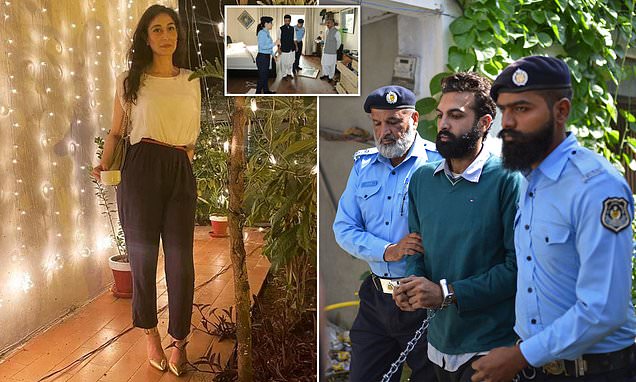 Zahir Jaffer, 30 (right), appeared in court in Islamabad today accused of raping, torturing and then beheading Noor Mukadam, 27 (left), at his home on July 20 (scene inset). Jaffer, who holds joint US-Pakistani citizenship and also spent time in the UK, is accused of flying into a rage after Mukadam – daughter of Pakistan’s former ambassador to South Korea – rejected his marriage proposal. Prosecutors say he beat her with knuckledusters, raped her and then butchered her with a knife at his Islamabad mansion before members of his family and their staff attempted to cover up the crime by hiding her body. He could face the death penalty if convicted, though he denies the charges.