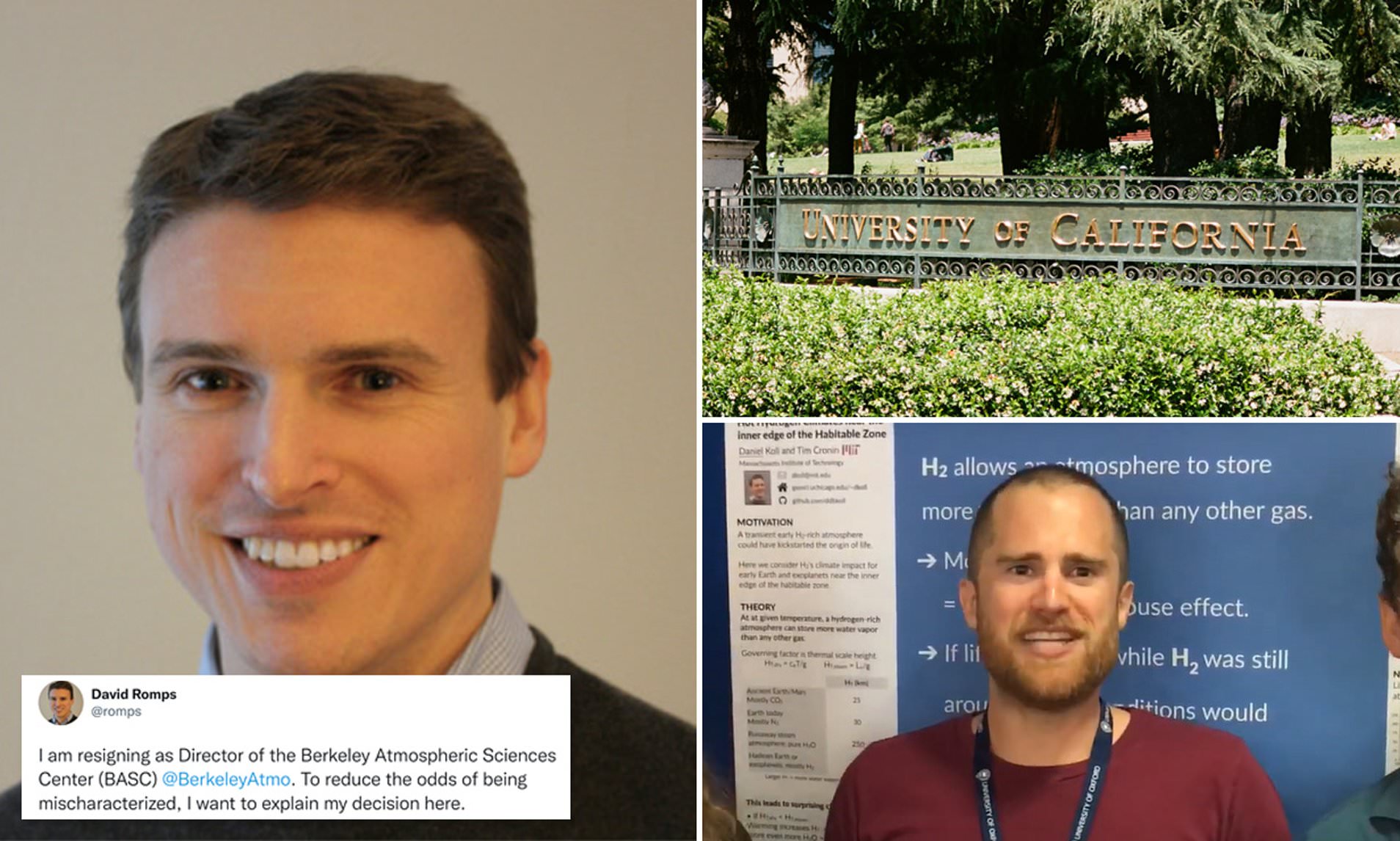 A leading scientist has dramatically resigned from his post at Berkeley University in protest at his colleagues’ refusal to invite a physicist to give a speech previously canceled by another college at the behest of a woke mob.

David Romps was the director of Berkeley Atmospheric Sciences Center (BASC), in California.

He resigned Monday after Berkeley refused his request to invite Dorian Abbot to speak on campus, and said he would stand down by the end of the year, or when a replacement candidate for his current role was found.

In the first of a series of tweets explaining his decision, Romps said: ‘I am resigning as Director of the Berkeley Atmospheric Sciences Center (BASC). To reduce the odds of being mischaracterized, I want to explain my decision here…’

Abbot, an associate professor at the University of Chicago’s department of geophysical sciences, was due to deliver the prestigious Carlson lecture at MIT on ‘new results in climate science’. But he found out that the October 21 lecture had been called off after protest at his views.

Abbot posted several videos on YouTube last year denouncing the rioting in Chicago that erupted in the wake of George Floyd’s murder at the hands of Minneapolis cop Derek Chauvin.

He also argued that students should be given the same opportunities and marked on their academic merit, rather than equity – equality of outcomes, a phrase whose use has become increasingly widespread.

Romps, angered by Abbot being disinvited from MIT, suggested to his own university that they allow Abbot to deliver his lecture there instead.

Princeton University took the same step, and on Thursday Abbot will speak at the New Jersey institution’s James Madison Program in American Ideals and Institutions.

But at Berkeley, Romps met resistance.

‘I asked the BASC faculty if we might invite that scientist to speak to us in the coming months to hear the science talk he had prepared and, by extending the invitation now, reaffirm that BASC is a purely scientific organization, not a political one,’ Romps explained on Twitter.

‘In the ensuing discussion among the BASC faculty, it became unclear to me whether we could invite that scientist ever again, let alone now.

‘I was hoping we could agree that BASC does not consider an individual’s political or social opinions when selecting speakers for its events, except for cases in which the opinions give a reasonable expectation that members of our community would be treated with disrespect.

‘Unfortunately, it is unclear when or if we might reach agreement on this point.’

Romps said he felt strongly that Berkeley denying Abbot the right to speak about science because of his political views was disturbing, and harmful to their scientific work.

‘The stated mission of BASC is to serve as “the hub for UC Berkeley’s research on the science of the atmosphere, its interactions with Earth systems, and the future of Earth’s climate,” he explained.

‘I believe that mission has its greatest chance of success when the tent is made as big as possible, including with respect to ethnicity, gender, age, disability, sexual orientation, religion, family status, and political ideas.

‘Excluding people because of their political and social views diminishes the pool of scientists with which members of BASC can interact and reduces the opportunities for learning and collaboration.

‘More broadly, such exclusion signals that some opinions — even well-intentioned ones — are forbidden, thereby increasing self-censorship, degrading public discourse, and contributing to our nation’s political balkanization.’

Romps, who has been director of BASC for five years, said he had loved the role – ‘but it was never my intention to lead an organization that is political or even ambiguously so.’

He concluded: ‘Consequently, I am stepping down from the directorship at the end of this calendar year or when a replacement is ready, whichever is sooner.’

He did not give further details on what had happened behind the scenes to drive him out, or name anyone involved in the refusal to invite Abbot to speak.

Abbot retweeted Romps’ remarks, in a show of support.

Abbot said last week that he had been ‘cancelled’ by a ‘woke mob’, who disagreed with his condemnation of the destruction done during the George Floyd protests, and his views on academic assessment.

This August Abbot poured fuel on the fire by co-writing an opinion piece for Newsweek in which he argued that the ‘Diversity, Equity, and Inclusion’ (DEI) initiative embraced on many college campuses nationwide ‘violates the ethical and legal principle of equal treatment.’

DEI, according to Abbot and co-author Professor Ivan Marinovic, ‘treats persons as merely means to an end, giving primacy to a statistic over the individuality of a human being.’

Abbot and Marinovic instead proposed ‘an alternative framework called Merit, Fairness, and Equality (MFE) whereby university applicants are treated as individuals and evaluated through a rigorous and unbiased process based on their merit and qualifications alone.’

The two academics believe that MFE would ‘mean an end to legacy and athletic admission advantages, which significantly favor white applicants.’

In response to the Newsweek op-ed, critics on Twitter demanded that Abbot be denied a chance to offer science seminars and that other speakers be picked in his place.

The online campaign against Abbot escalated last month as students lobbied MIT to disinvite him from delivering the Carlson Lecture, a ‘major honor in my field,’ according to the professor.

Abbot, who was invited to give the lecture in January of last year, writes that a ‘Twitter mob’ started demanding that MIT disinvite him from giving the lecture.

‘It worked. And quickly,’ according to Abbot.

He writes that the chair of the faculty, EAPS, at MIT called him on Thursday to inform him that they would be cancelling the annual lecture ‘in order to avoid controversy.’