China’s Take-over in America’s Back Yard: How Beijing Has Spent $140 Billion on Ports, Roads, and Power Plants in Latin America and the Caribbean as Cuba Signs a New Energy Deal While US Influence Fades 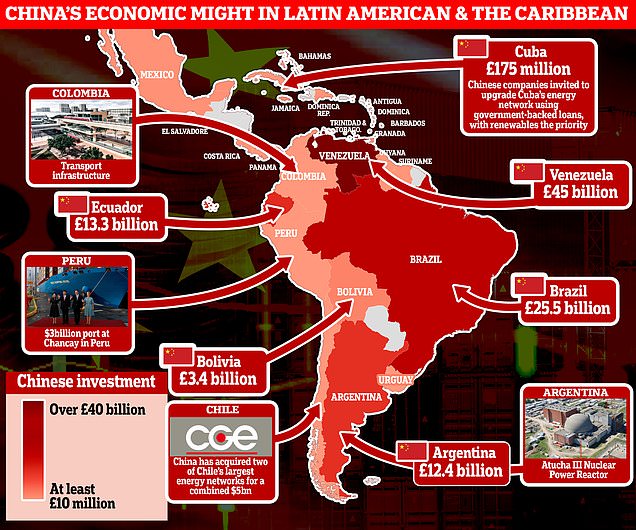 On the face of it, America has little to fear from China’s new deal to upgrade Cuba’s power grid. The countries are already firm allies via their Communist leaders, Havana is under a diplomatic and economic embargo from Washington, and all efforts to mend ties between the two ended when Obama left office.

But scratch the surface and what emerges is a picture of Chinese economic dominance in America’s backyard that would be enough give any president sleepless nights.

In fact, the deal with Cuba – signed this week as part of China’s trillion-dollar Belt and Road Initiative – is just the latest in a long line of loans, trade deals, construction projects and other investments in Latin American and the Caribbean that has seen Beijing flex its growing economic muscle while America’s strength wanes.

Since 2005, China’s three largest state investment banks have loaned some $140billion to countries in Latin American to pay for everything from nuclear power stations to dams, roads to railways, ports and phone networks.

Billions more – nobody knows quite how many – have been lent via contracts with commercial banks, private finance initiatives and other deals which are opaque and hard to track, though researchers have found they sometimes dwarf deals done on-the-books.

Meanwhile Chinese trade with Latin America has shot up more than 25 times, rising from $12billion in 2000 to $315billion in 2020 as almost half of the countries in the region saw their largest trading partner flip from being the US to China – including three of the four largest economies, in Brazil, Argentina and Colombia.

All of which gives China leverage that it uses to get its own way on the international stage, from winning votes at the UN to isolating its enemies – most notably Taiwan, as Beijing often requires countries to cut diplomatic ties with the island before it will hand over money.