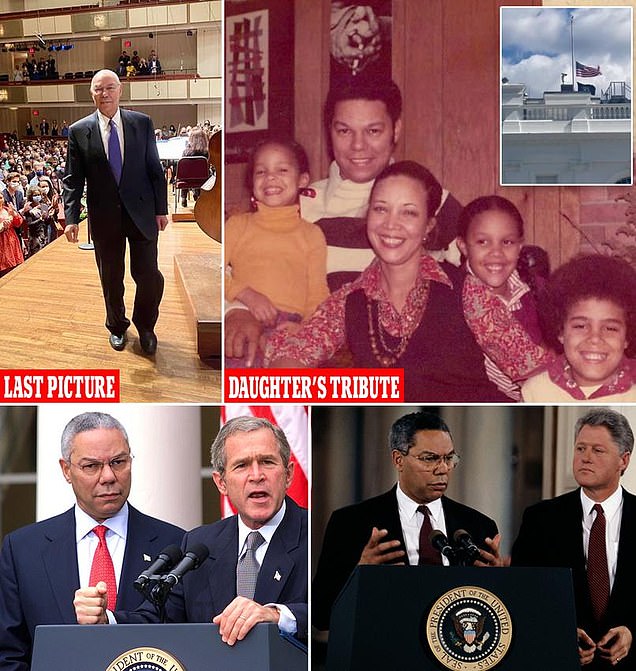 Colin Powell, the first black Secretary of State who formulated foreign policy under several presidents, died Monday morning at the age of 84 of complications from COVID.

The Pentagon powerhouse who served as a soldier in Vietnam and went on to become Chairman of the Joint Chiefs of Staff was fully vaccinated and battling blood cancer and Parkinson’s when he passed away at Walter Reed Medical Center in Maryland, according to his family.

Retired Four-Star General Powell, who was also suffering from Parkinson’s, is survived by his wife of 59 years, Alma, and three children, and has a celebrated career that saw him rise up the military ranks after growing up in a Jamaican immigrant family in Harlem.

Alma Powell also had a breakthrough case of COVID but responded to treatment, according to reports.

President Joe Biden released a statement shortly after noon on Monday, four hours after his death was announced, commending Powell as having ‘the highest ideals of both warrior and diplomat’ and commemorating his humble beginnings.

He also ordered all US flags across government buildings and military posts nationwide to fly half staff until October 22.

‘Jill and I are deeply saddened by the passing of our dear friend and a patriot of unmatched honor and dignity, General Colin Powell,’ Biden said. ‘The son of immigrants, born in New York City, raised in Harlem and the South Bronx, a graduate of the City College of New York, he rose to the highest ranks of the United States military and to advise four presidents. He believed in the promise of America because he lived it. And he devoted much of his life to making that promise a reality for so many others.’

‘As a Senator, I worked closely with him when he served as National Security Advisor, Chairman of the Joint Chiefs of Staff, and as Secretary of State. Over our many years working together – even in disagreement – Colin was always someone who gave you his best and treated you with respect.’