Defense Secretary Lloyd Austin mourns ‘friend and mentor’ Colin Powell and joins Bush and Carter leading tribute to ‘American hero’ after his death from coronavirus at 84: He says ‘I have a hole in my heart’ 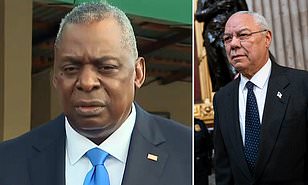 Defense Secretary Lloyd Austin delivered an emotional tribute to former Secretary of State Colin Powell Monday shortly after learning of the death of a man he called a mentor.

‘The world lost one of the greatest leaders that we have ever witnessed,’ Austin.

‘Alma lost a great husband, and the family lost a tremendous father and I lost a tremendous personal friend and mentor,’ said Austin who as the nation’s first black secretary of defense followed in Powell’s footsteps. Powell was the first African American chairman of the joint chiefs of staff.

‘He has been my mentor for a number of years. He always made time for me and I could always go to him with tough issues. He always had great counsel. We will certainly miss him.

‘I feel as if I have a hole in my heart just learning of this,’ said Austin, who spoke to TV cameras while traveling in Europe hours after Powell’s family announced his passing.