Cases Double in Four Days in Southwest England as They Soar by 30% to 45,140 a Day After Lab Wrongly Told Up to Tens of Thousands They Were Negative 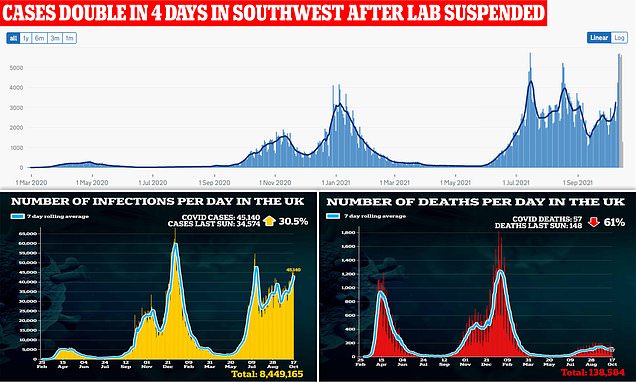 The uptake of Covid booster jabs may be too slow to prevent hospitals from becoming overcrowded this winter, experts have warned as cases soar by 30 per cent.

One month into the booster programme, only half of eligible over-80s have received a third dose, despite being at heightened risk, NHS figures suggest. Of the 2.2 million who had a second jab more than six months ago, fewer than 1.2 million have had the booster.

The number of people aged 65 to 84 admitted to hospital has risen 19 per cent in the past week, with admissions up 8 per cent among people over 85.

Yesterday the UK reported a 30% weekly increase of coronavirus cases to 45,140 within 28 days of a positive test – the highest total since July – but deaths plummeted by nearly two-thirds from 148 to 57 in the space of a week.

In Scotland, which still has mask rules, cases per capita are higher despite the tougher restrictions.

It comes after testing operations at Immensa Health Clinic Ltd’s laboratory in Wolverhampton which mainly served the south west were suspended because of faulty tests.

Health officials revealed that 43,000 people in south west England may have been wrongly told they don’t have the coronavirus because of problems processing PCR test results at the lab.

The Health Security Agency said a lab in Wolverhampton was suspended from processing the swabs after reports of false negatives. The faulty results are among tests processed at the Immensa Health Clinic Lab between early September and this week.

The issue was uncovered after some people who were positive for COVID-19 when they took rapid tests went on to show up as negative on more accurate PCR tests.

And it comes amid fears Britain will start to see a possible waning of protection against Covid in those who got their vaccines the earliest, as happened in Israel earlier this year.