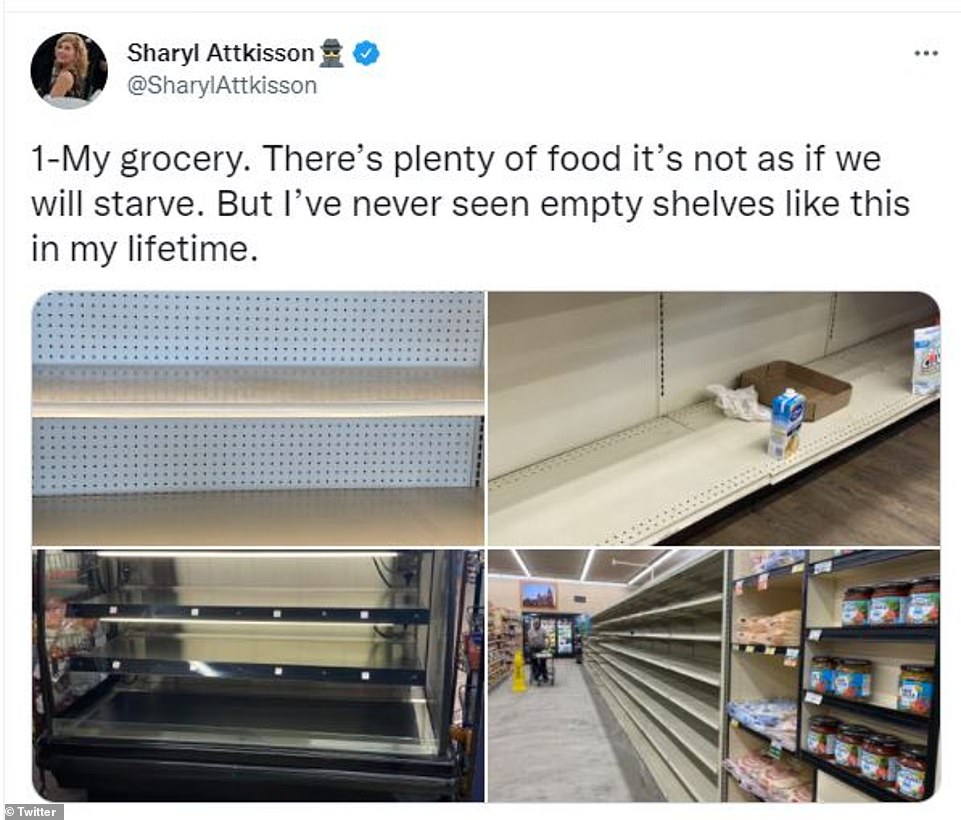 Frustrated shoppers complaining about shortages of everyday products in their local stores are attacking President Joe Biden online with the hashtag ‘Empty Shelves Joe’ as the US faces severe supply chain problems that could stretch into the new year.

Dozens of cargo ships carrying hundreds of thousands of containers of goods from China and Asia are waiting to dock in California as concern grows about likely Christmas shortages. Some retailers such as Costco and Walmart are limiting sales of toilet paper in some areas and toy company CEOs are telling parents to buy their kids’ Christmas gifts now to avoid disappointment.

There are similar problems with homegrown goods that can’t be transported quickly enough by truckers or on freight trains. 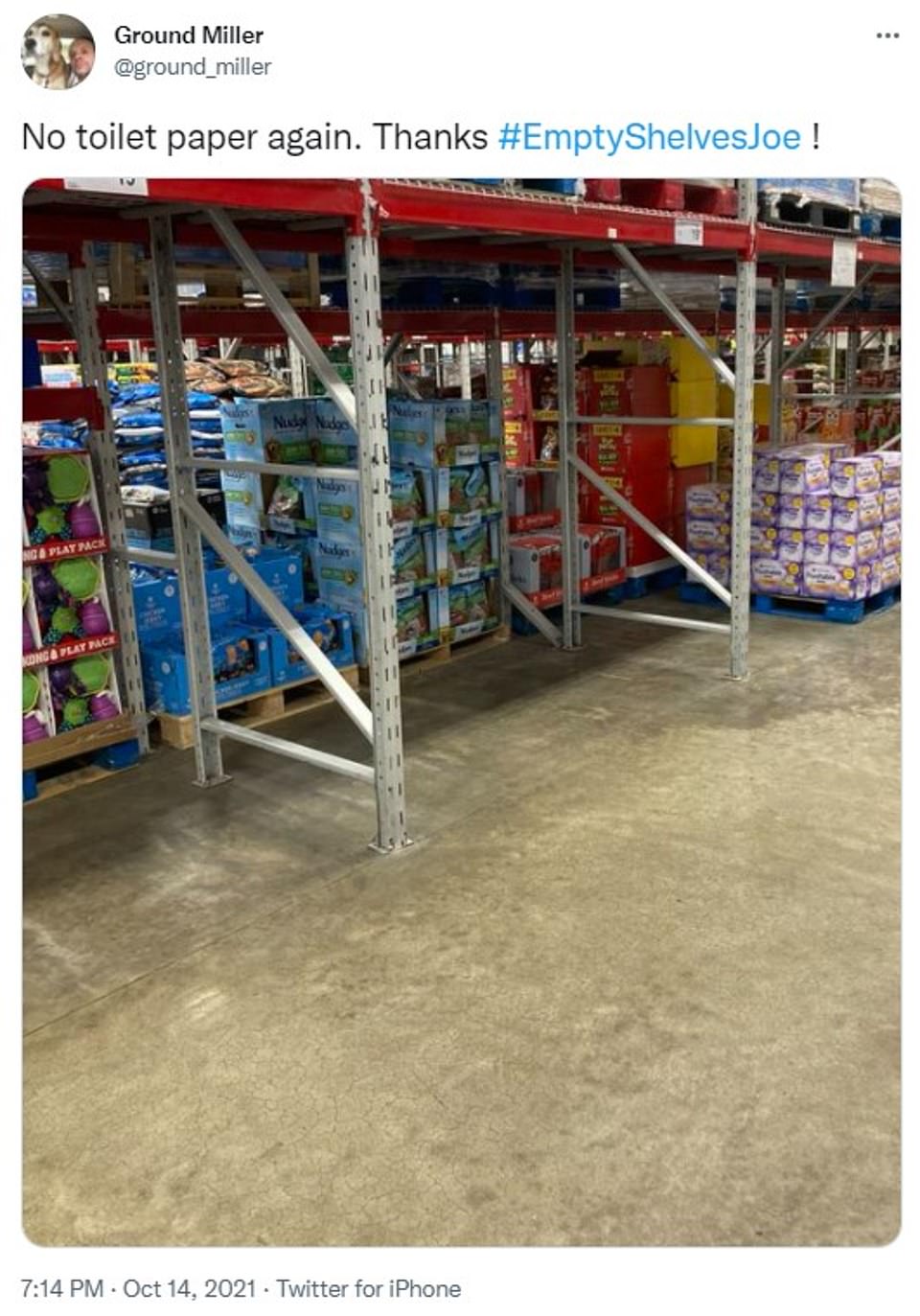 The problems – which have tormented business owners around the world for months – are being laid bare by American shoppers who, when confronted with poorly stocked stores and rising prices on the items that they can find, are sharing photos on social media.

Consumers are also complaining that they have to go to the grocery store every day to find basic items that they previously could have purchased in one shop.

Biden on Wednesday acknowledged the concerns and intervened by announcing that the Port of Los Angeles – North America’s busiest container terminal – would start 24-hour operations to help ease bottlenecks that are choking commerce and pushing up prices. Those round-the-clock operations began on Thursday. 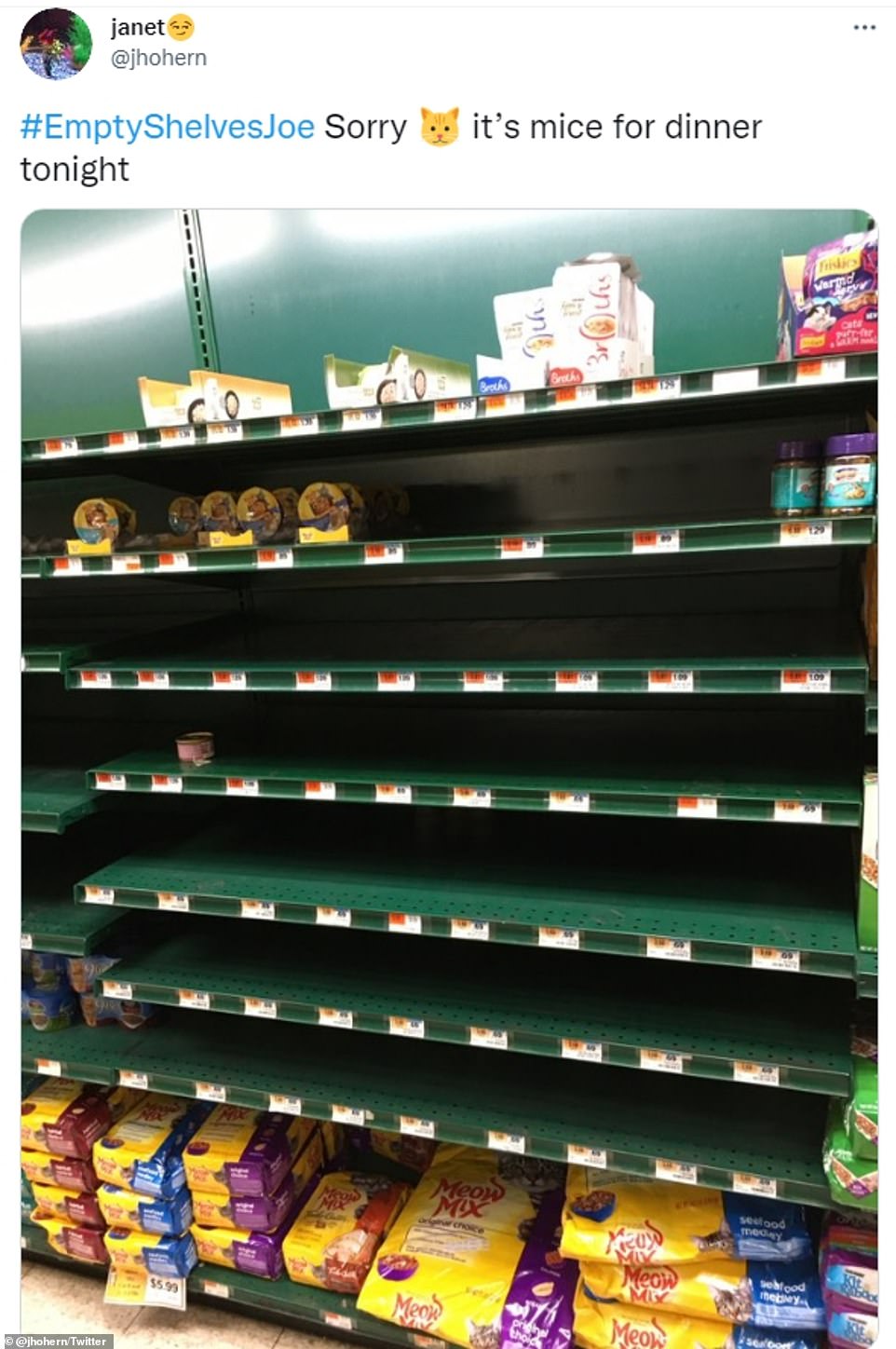 Until the bottlenecks in the supply chain are removed, the complaints about shortages will mount.

The move was too little, too late, for Republicans who accused the government of waiting months to try to fix the problem.

On Thursday it was revealed by Politico that as the crisis mounted, Biden’s Transportation Secretary Pete Buttigieg went on paternity leave in August and September after he and husband Chasten adopted twins. He is now back at work but will ‘continue to take some time over the coming weeks to support his husband and take care of his new children’, a Department for Transportation spokesman said.

In his Wednesday announcement, Biden said: ‘With the holidays coming up, you might be wondering if gifts you plan to buy will arrive on time? I know you’re hearing a lot about something called supply chains and how hard it is to get a range of things from a toaster to sneakers to bicycles to bedroom furniture.’

He called new agreements with ports, unions, and shippers ‘a sign of major progress in moving goods from manufacturers to a store and to your front door.’

But earlier on Wednesday, Jen Psaki, the White House Press Secretary, had sparked alarm by saying: ‘We are not the postal service or UPS or FedEx. We cannot guarantee. What we can do is use every lever at the federal government’s disposal to reduce delays, to ensure that we are addressing bottlenecks in the system, including ports and the need for them to be open longer hours.’

The shortages are due to issues in the global supply chain, but Biden’s critics have accused him of mismanagement.

Senator Rick Scott called on Biden’s Transportation Secretary Pete Buttigieg and Commerce Secretary Gina Raimondo to testify before the Senate Committee on Commerce, Science and Transportation. Senate Transportation Committee member Cynthia Lummis told the Washington Examiner: ‘We’re well over a year into this, and I’m concerned that the Biden administration seems more focused on pushing Congress to massively expand the federal bureaucracy rather than using their existing authorities to help American businesses and consumers get back to normal.’

Representative Kevin Brady, ranking member of the Ways and Means Committee, added that the administration’s actions finally addressing these issues is ‘months late and more than a dollar short’. He claimed the White House has been in ‘denial’ related to supply chain problems. 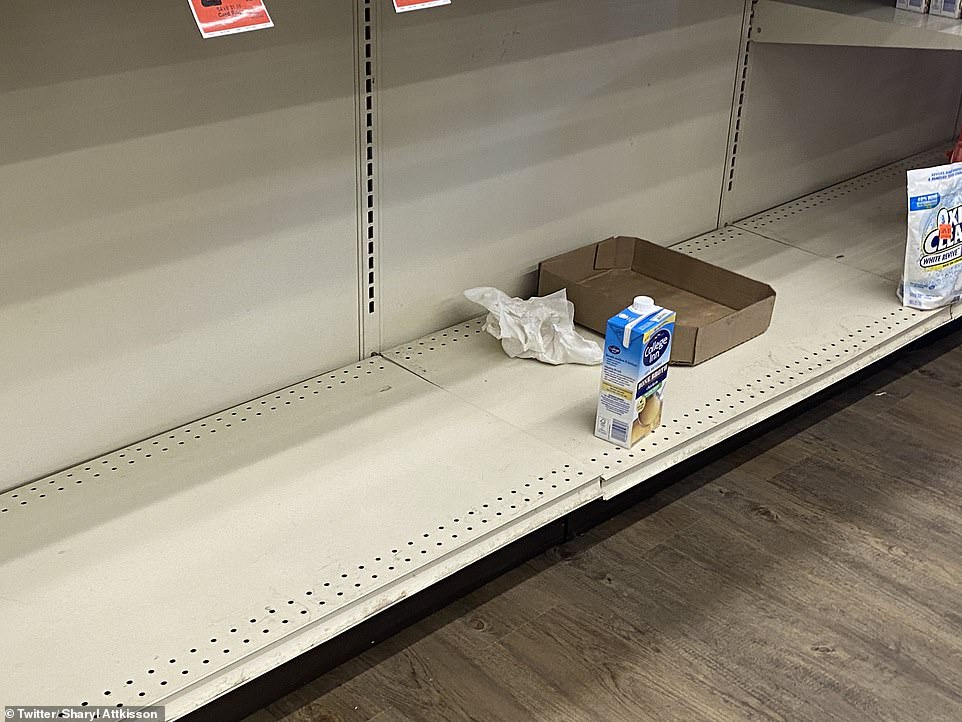 ‘We’ve heard a lot of talk and a lot of formation of task forces but nothing concrete to address this,’ the Texas Republican said. ‘My first advice to Secretary Buttigieg is stop making it worse and tackle the real issues,’ Brady said, accusing Biden’s team of making labor shortage issues worse by implementing a vaccine mandate for companies with more than 100 employees. 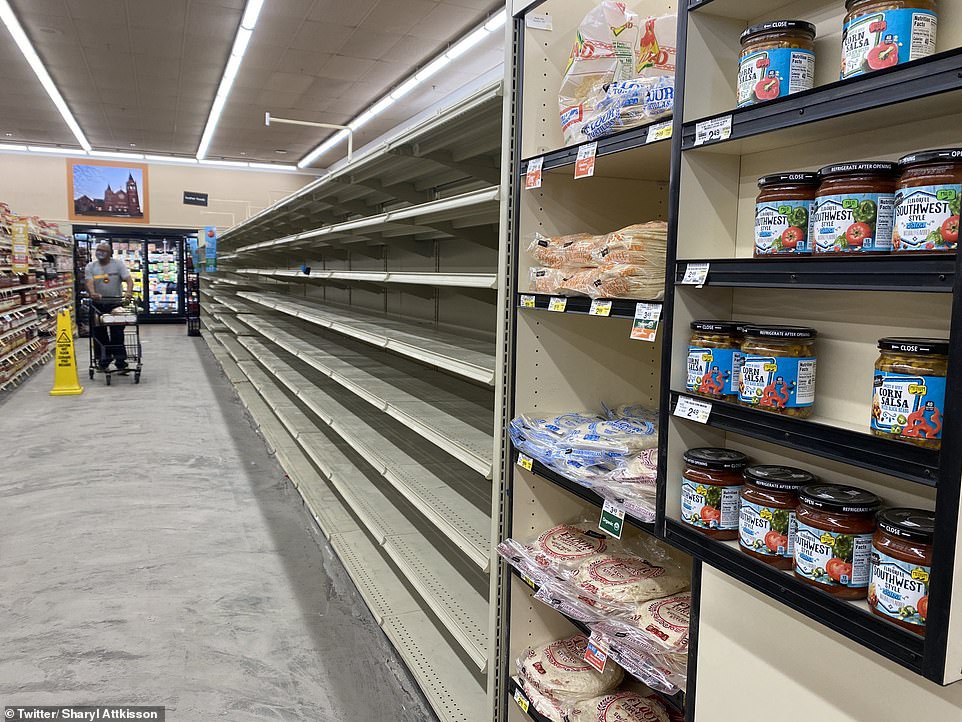 Jack Posobiec, an alt-right activist and commentator, noted that ‘EmptyShelvesJoe’ was the number one trending topic on Twitter. 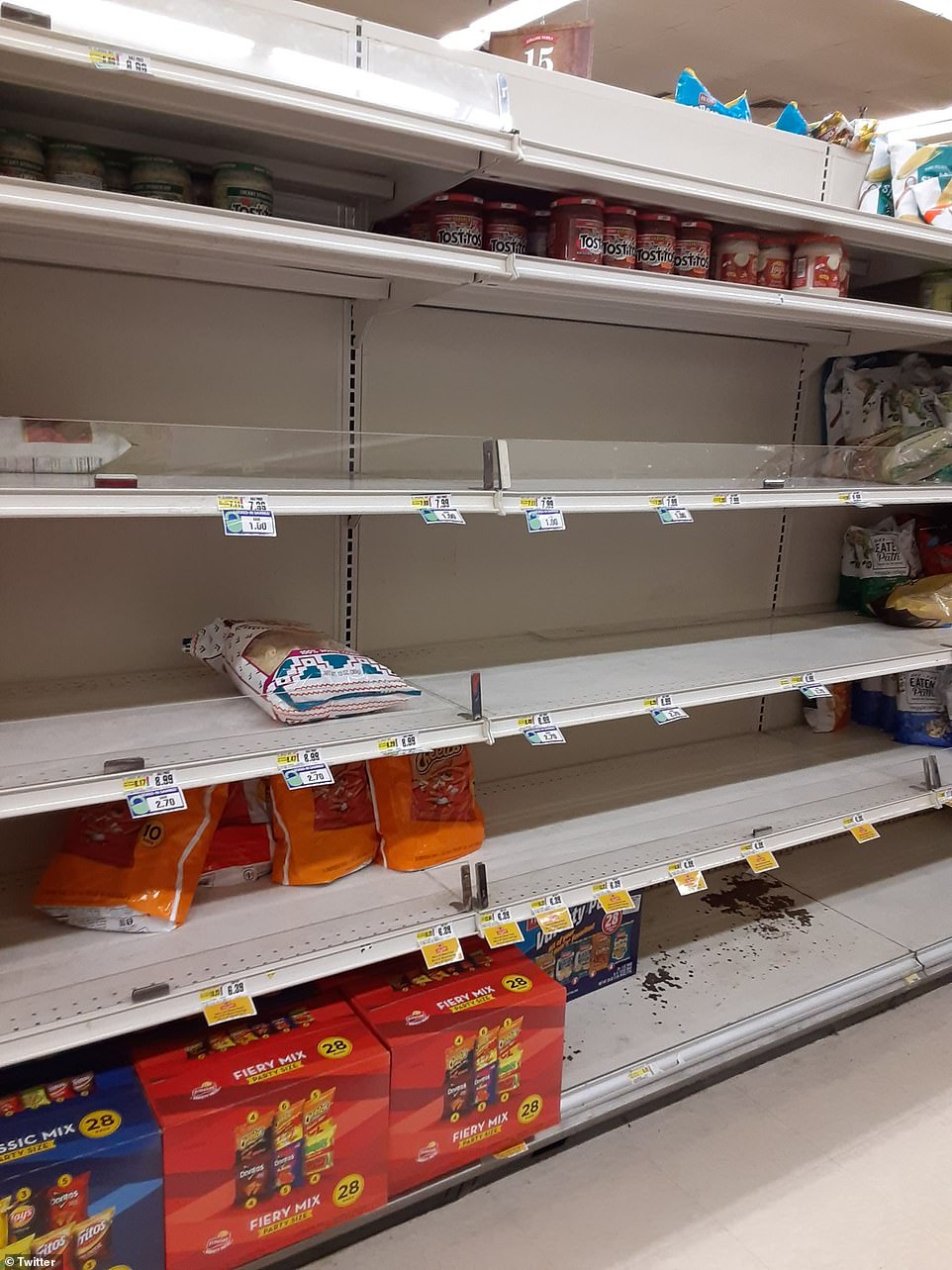 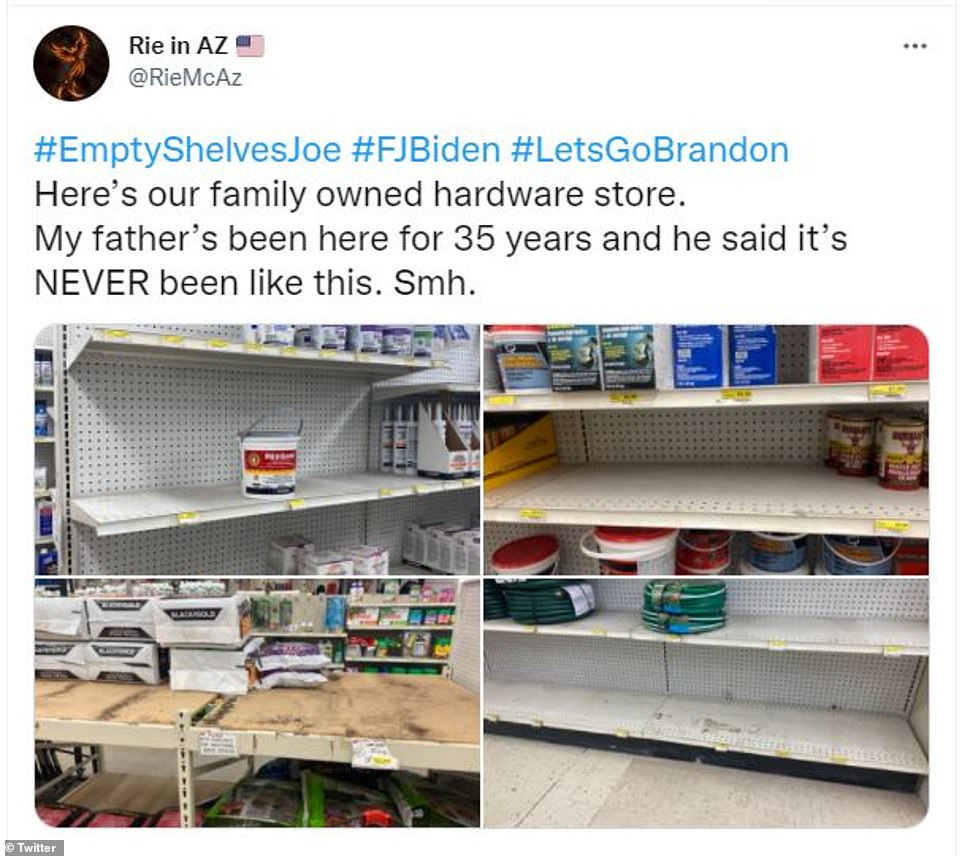 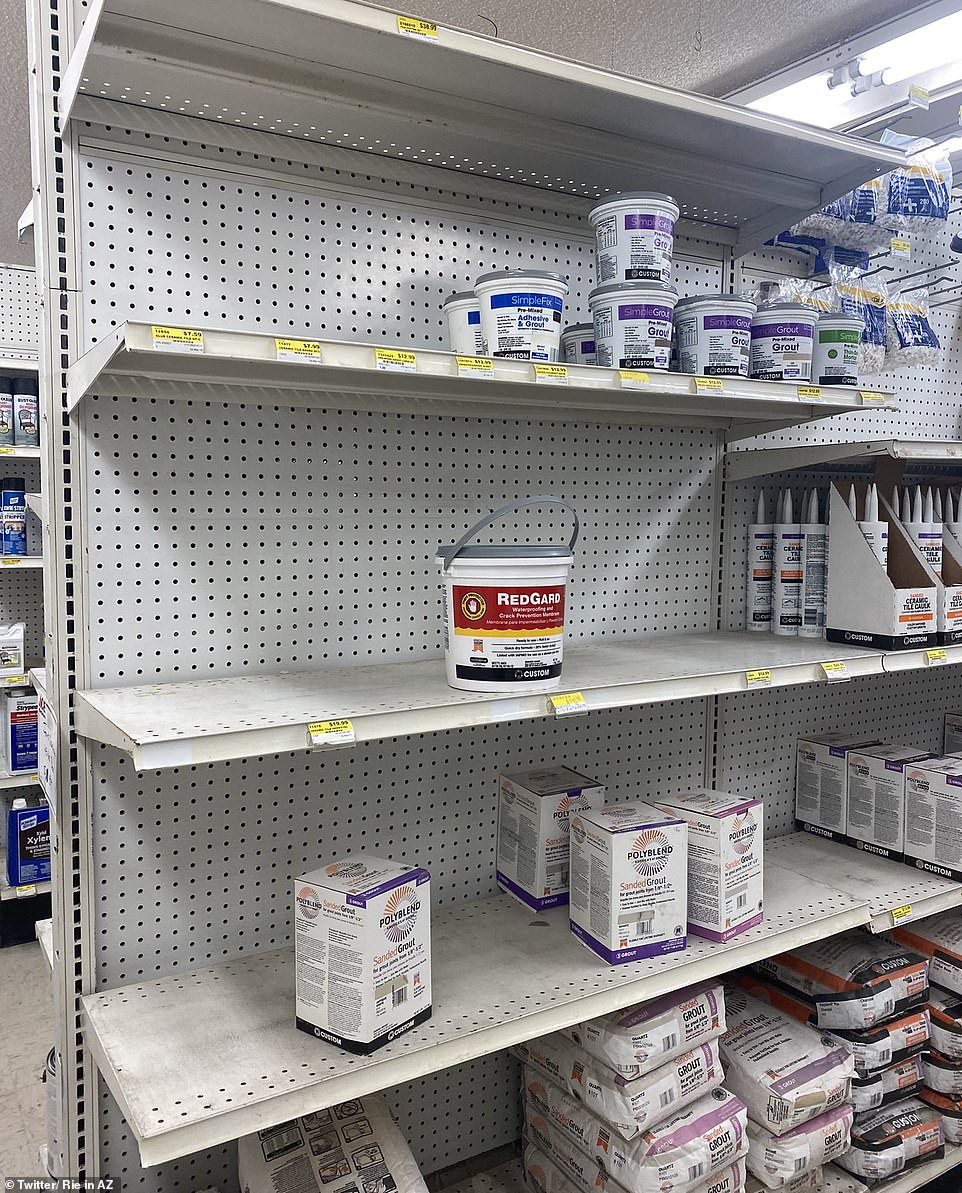 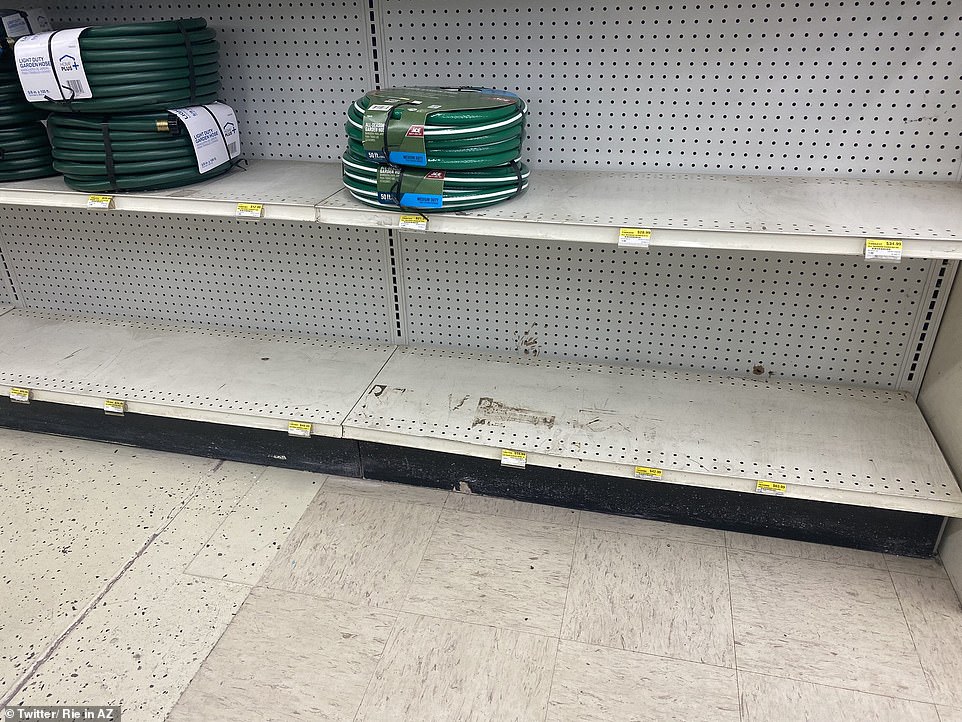 Country music singer John Rich tweeted: ‘Hard to mess up a country any faster than #EmptyShelvesJoe but I have to say, he’s brought unity to much of the country by way of getting the majority of Americans to give the big thumbs down and chant #LetsGoBrandon from coast to coast…In that respect, Joe is a unifier.’

The ‘Lets Go Brandon’ chant has in the past two weeks become a rallying call for opponents of the president, starting after a TV presenter misheard a Nascar crowd on October 2 yelling: ‘F*** Joe Biden’ – and told her viewers they were chanting: ‘Let’s go Brandon.’

Sharyl Attkisson, a journalist with Washington DC-based Full Measure News, tweeted a picture of empty shelves, noting: ‘My grocery. There’s plenty of food it’s not as if we will starve. But I’ve never seen empty shelves like this in my lifetime.’

Pearson Sharp, with One America News, tweeted a parody logo for Biden, with the E resembling empty shelves.

A shop owner in Arizona shared photos of his family’s store without the usual supplies.

‘My father’s been here for 35 years and he said it’s NEVER been like this. Smh.’

A man in Illinois tweeted a photo of a sparsely-stacked warehouse in Illinois, and said: ‘No toilet paper again. Thanks #EmptyShelvesJoe!’

A woman by the name of Laurie said: ‘Just went food shopping…again…thanks #EmptyShelvesJoe.