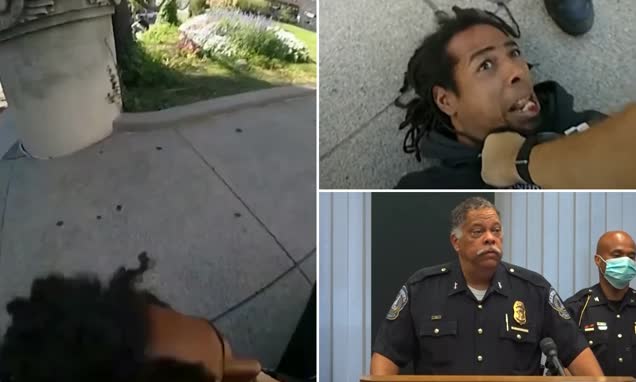 Jermaine Vaughn was stomped in the face by Indiana Metropolitan Police Sgt. Eric Huxley during a disorderly arrest. Huxley was criminally charged and suspended without pay, pending the conclusion of the internal investigation. IMPD Police Chief Randal Taylor said he recommended Huxley be fired. Federal prosecutors are also looking to see if Huxley should be charged with a federal crime. Vaughn was arrested and charged with disorderly conduct on September 24, but police didn’t say what he did before the arrest. Chief Randal Taylor – pictured (bottom right) during Tuesday’s press conference – said, ‘This video is going to make you as upset as it did me … There’s no excuse for it.’